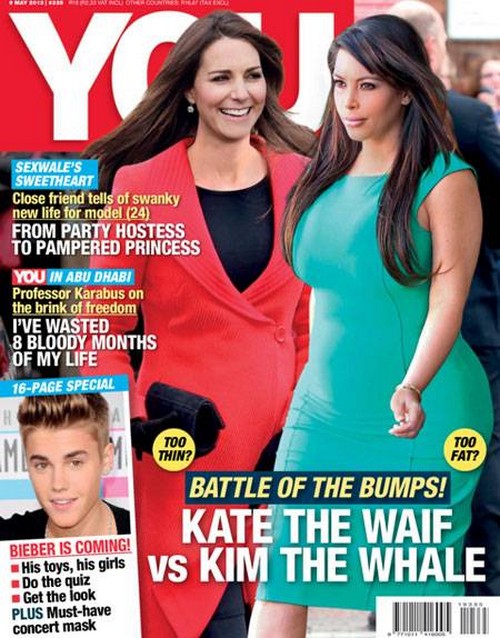 South African tabloid, You magazine, is causing quite the stir this week with its newest cover. With a headline reading, “Kate the Waif/Kim the Whale” it’s doing what just about everyone else in the media world is doing and comparing the baby bumps of the two most famous pregnant woman at the moment. But did it go too far?

I’ve done my share of writing about Kate Middleton’s mommyrexia and Kim Kardashian’s 200-pound weight gain so I can’t bitch too much at the cover. Still… calling a pregnant woman a whale is a bit offsides. And that pic of Kate is old. She’s definitely showed she’s got a baby in there somewhere by recent appearances.

God, I hate the fact that I’m defending Kim on this one but obviously comparing these two and their body types is just stupid not to mention mean. Compare their fashion. Compare the useless baby shit they buy but don’t compare their bodies. They’re just so different. Kim’s curvy. She’s got a whole lot of T and A going on. I’m pretty sure Kate has no hips and, if this pregnancy can’t give them to her, then they’re never going to happen. And her boobs aren’t half the size of Kim’s and, even if they are bigger than they used to be, she’s not one to start flashing them in cleavage-bearing tops (at least not unless there’s an enterprising paparazzi around).

So this cover is over the top and cruel. Not the best week for Kim. First Anna Wintour cuts her out of Vogue and now she’s being called a whale. I swear I wouldn’t wish her pregnancy experience on anyone. I’m not saying she helps matters, but it still doesn’t seem like it was all that fun. Hopefully she’ll pop that kid out in June and we can all move on. Don’t worry, we’ll find something else to fixate on.

What do you make of this Kim Kardashian/Kate Middleton baby bumps cover? Did the tabloid go too far or is just in line with what everyone else is doing?