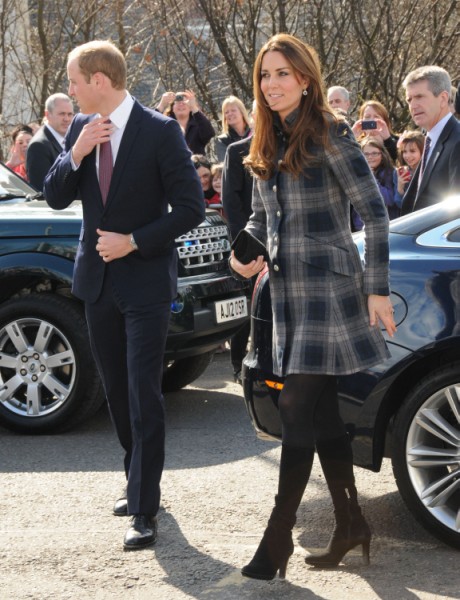 I’m actually surprised this story didn’t come out sooner. Obviously it’s much more kosher to shit on Kim Kardashian than the future Queen of England which really isn’t fair since Kate Middleton technically is not royal and used to love to mug for the cameras just as much as Kim. And they’re both selling their pregnancies to the public. I suppose it’s always safer to rip on the fat girl. But what about the six-month+plus pregnant chick who’s barely showing? Why has no fuss been made there? Well, apparently there has but it’s been very, very quiet. We wouldn’t want to hurt the Duchess’s feelings would we?

According to Us Weekly the “mommyrexic” term has been floating around Kate these last couple months but a source is just chalking it up to good genes. The source confirmed that Carol Middleton stayed super small throughout her pregnancies and barely had to wear maternity gear until her last month so it should be no surprise that the same is happening with Kate. OK. Whatever. Fine.

If anything, Kate’s slender physique is just a testament to how skinny she was in the first place. If you’ve only gained 10 pounds by six months and were only 100 pounds to begin with then you’re still freaking small. Kim obviously wasn’t in that boat and she’s made it clear that her indulges are more than just a mere cookie at Starbucks every once in awhile. Kim’s been chowing down on froyo and In-N-Out Burger and the occasional burrito. And she’s even got Gloria Steinem defending her so we all really have to back off now!

So my question to you is is this fair? For better or for worse these two women have had their pregnancies tracked and compared for half the year and Kate has gotten off pretty easy. True she’s not hopping to the gym in sheer tops. She tends to wear boxy coats instead essentially hiding everything Kim’s trying to flaunt. Most people agree her maternity style has been impeccable and appropriate (short hemlines and all). These women aren’t role models although they are arguably the most photographed women in the English speaking world so whether or not they feel responsibility to be role models is besides the point. People look to them as examples. So is one better than the other? Kim Kardashian’s weight has been the source of a lot of attention but it isn’t unhealthy. It’s pretty normal. I’d argue Kate’s weight is a little under for what it should be despite her “genetics”. What do you think? Are the Kate Middleton/mommyrexic claims hurtful or sorta true? Could Kim Kardashian (God forgive me) actually be a better example for a healthier pregnancy – fears and all?