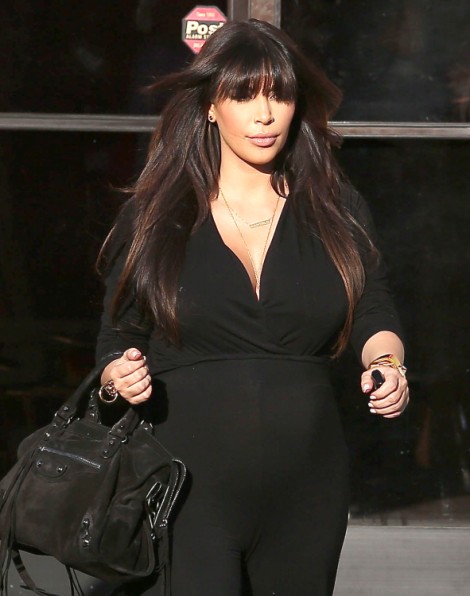 This just made me laugh because it’s so stupid and so Kim Kardashian. Cravings can be a bitch and apparently nothing is going to get between a pregnant woman and a burrito – especially if that pregnant woman is Kim and she has cops to help her out.

The Sun reports that Kim was really in the mood for her favorite Mexican snack and had her bodyguard drive her to Casa Vega in Hollywood. When she got there the place was crawling with paps so she told the driver to keep going but after driving around for a bit she decided she absolutely HAD TO HAVE IT and made a call to some special friends. Yep, she called the police to help get her food. Please God let there be video out there somewhere of this happening! It’s too good. I understand cravings but God damn! You know these pics will be on the front cover of every magazine next week with the headlines “Kim Kardashian Can’t Stop Eating – She’s Gained 100 Pounds So Far!” But, then again, this is The Sun so you can take it or leave it.

One thing I do know that happened for sure is that Kim was back to tweeting about her pre-pregnancy body again. We talked about this before, right? She keeps wistfully harping on about what she used to look like and it’s weird. All it does is point out that you don’t look like that anymore and you sound bitter about the whole thing. Biotch you’re pregnant! Deal! Anyway, she just tweeted an old pic of herself in a bikini for a photo shoot and wrote, “I miss you.” Now, you still want me to believe your song and dance that you love your new curves? Why keep flashing old pics of yourself? You think we’re going to forget you looked like that after nine months? I understand you don’t hang out with rocket scientists every day but trust me when I say we aren’t that stupid.

Is Kim Kardashian’s bikini tweet desperate to anyone else? I don’t know why this bugs me but it does. Kim doesn’t want us to “bully” her by discussing her weight gain but it’s obvious that it’s all she can think about. We’ll move on when she moves on. I don’t care what Gwyneth Paltrow and Tracy Anderson say, Kim is not enjoying any of this.

Side note: Are her lips getting bigger? Don’t they tweaked? Is she playing with her face so we’ll focus on that instead of her body?