Kate Middleton To Be ‘Pimped Out’ By British Government? 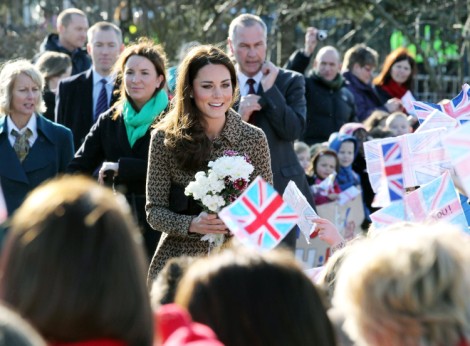 Well, this is a way to get elected.

MP candidate and comedian/satirist, John O’Farrell, is proposing a new plan to help the British government get out of debt – pimp out Kate Middleton. In his new book, A History of Capitalism According to the Jubilee Line, he writes: “American businessmen. Wealthy Arabs. They’d pay a fortune to give Kate Middleton one. I know I would if I had the dosh. This geezer might have actually come up with the solution to Britain’s national debt.”

So basically O’Farrell wants Kate Middleton to be the next Lindsay Lohan – only I assume she’d get paid much more and not actually have to sleep with the sugar daddies at the end of the night.

So are you all crying out there that this is disrespectful? It’s not the first time a member of parliament has flapped their gums inappropriately about the future Queen. You kind of feel that the bloom is off the rose when it comes to the Duchess of Cambridge, don’t you? I’m sure Kate Middleton’s baby will help restore her popularity when the time comes but she hasn’t had the best couple of months. First we had the severe morning sickness which turned out to not be as severe as she and Prince William let on and then we had the laziness (which is ongoing, by the way) and now we have a new fresh fleshy pic scandal. And there’s not much empathy for her. I think Kate and Will miscalculated on this one. They thought crying over the privacy intrusion would get them some sympathy but all the photos have really done is point out how the royal couple loves to take vacations on the people’s dime. Even if Kate’s parents paid for the trip, they certainly aren’t paying for the secret service guys following the couple around.

And now Kate’s job is being compared to a prostitute. I have to stick up for prostitutes on this one. Their work ethic is way better than Kate’s.

Has Kate dug herself a hole with her recent actions or will the pendulum swing back in her favor in no time? Are O’Farrell’s words inappropriate or does he have a funny point?