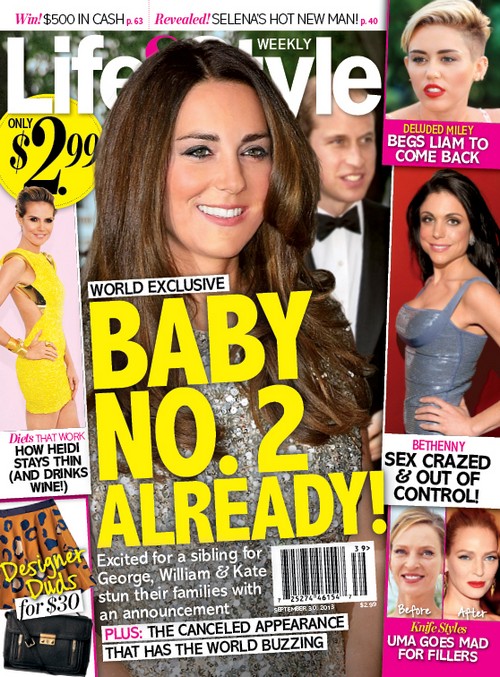 I’m not sure what to make of this but according to some sources just two months after delivering Prince George, Kate Middleton is expecting baby number two. Is it possible? Well sure because a woman is never more fertile than in those first few months after having a baby and the Sept. 30th print edition of Life & Style is insisting that it’s exactly the case. Supposedly the couple has already shared the news with their families.

Remember last weekend when Kate opted not to attend the wedding of a close friend and William was spotted with Prince Harry and Pippa Middleton instead? Well maybe Kate wasn’t feeling well enough to attend. Her lack of presence did start the rumor mill churning with notions of Postpartum Depression and tension in her marriage. Maybe it was simply a case of the new mommy also dealing with the exhaustion that comes along in early pregnancy.

Also in the latest issue of Life & Style you can read about Miley Cyrus’s desperation to get Liam Hemsworth to stay with her. We all know that having Miley on his arm at this point is just bad business for Liam who is trying to really establish himself as a serious actor. Supposedly Miley was beyond upset by the split but in between her twerking and drugging she seems to hide the heartbreak pretty well, don’t you think?

Do you believe that Bethenny Frankel is even capable of being a party animal? She’s such a control freak I can’t really imagine her letting go enough to have a good time but according to Life & style she has been really bad lately. Supposedly Bethenny is all about partying and random hookups. I’m not sure that I’m buying that, do you? Tell us in the comments below!