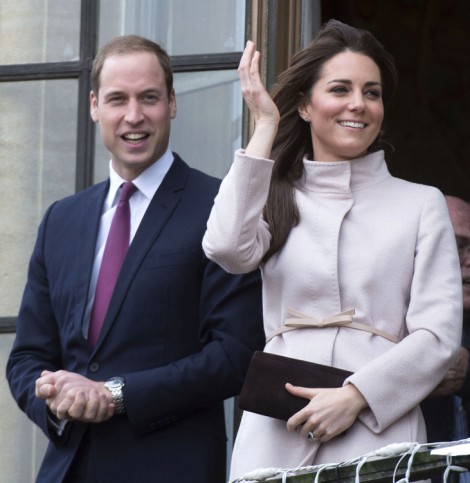 Well, that didn’t take long, did it? Just days after reports surfaced that Kate Middleton was papped in a bikini while on vacation with Prince William and her family, an Italian magazine went ahead and published the photos. Good ‘ole Chi magazine. It didn’t disappoint with the topless vacation pics from last summer and it isn’t disappointing now. These are slightly less sensational but they are the first shots of that famous baby bump so it won’t just be us degenerates sneaking peeks this time around I’m sure.

I’ve only seen the two photos on the cover so far. I’m sure we’ll have more to talk about tomorrow regarding the Kate Middleton Mustique babymoon. They are much better quality than I thought and must have been taken from a boat offshore. Kate looks cute and svelte in her little blue bikini with her arm draped around William. So adorbs! What do you think of the bump? It’s growing – not huge that’s for sure – but it’s on its way (that’s really all I have to say about baby bumps. What the hell are you supposed to say?). It is great to see her looking a little more filled out. Remember those honeymoon photos? Ugh, she looks less like an Avatar with meat on her bones.

Naturally the palace is screaming about an invasion of privacy and a royal source has already told Us Magazine that Kate is “shaken up” by the whole thing. “It’s been a real sour note for the end of their trip,” the insider said. “For Catherine, it was the first time she had shown her baby bump, and so for it to be exposed so quickly has shaken her up a little. They thought with the privacy laws on the island they would be able to spend a moment outside of the house without this happening.”

Really… shaken up? There are countless photos of your boobs, biscuit and ass crack all over the internet. This should be gravy! But still, she probably wanted a coming out party for her baby bump. Bikinis aren’t as dignified as charity visits. But she should just relax. She’ll still get her big reveal, it just won’t be as exciting as this unfortunately.

What do you make of the first Kate Middleton pregnant bikini photo – no big deal or total invasion of privacy yet again?