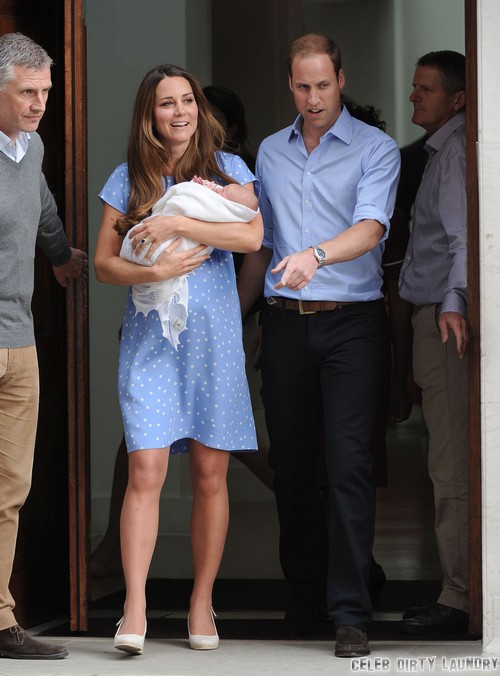 It’s been several weeks since Prince George was born, but Kate Middleton is already set to make her first post-birth public appearance in her formal royal capacity. According to new reports, the Duchess of Cambridge will be appearing at the inaugural Tusk Conservation Awards on September 12th.

Although Kate is technically on maternity leave [from what? – oh yes, being Princess of the United Kingdom!  – was she not a princess while on maternity leave – did she revert to commoner status like Cinderella at midnight?], it will be her first formal engagement since George’s birth, and the first time she’s seen in public since leaving London to go to Bucklebury.

The Tusk Trust is a UK charity for which Prince William is a patron, and it funds African conservation projects. Kate will reportedly be leaving George at home since he is still too young to travel, and he will probably be with his maternal grandparents while his mother and father are away on duty.

A royal rep confirmed the news, saying, “It is a long standing engagement.” William has also given his first extensive interview to CNN after George’s birth, speaking about his charity work and his hope that George will continue it when he grows up. The interview will be shown on CNN on September 15th, and will be a part of a documentary focusing on Will’s new role as a father.

William also reportedly speaks about how much the conservation projects in Africa mean to him, and how the values he treasures were instilled in him by his own mother, Princess Diana, when he was younger. Will seems very passionate about this project, and he looks like he’ll be a much better father and role model to George than Prince Charles was to him.

What do you guys think of Will’s goals regarding the Tusk charity, and Kate’s first appearance after George’s birth? Let us know your thoughts in the comments.