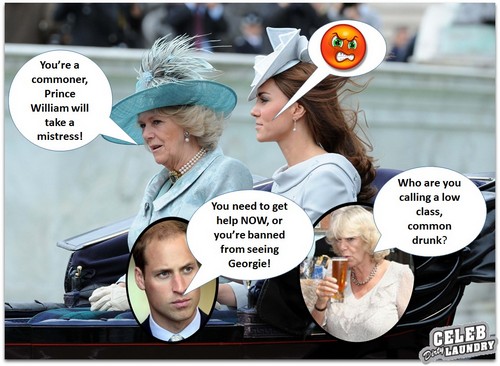 Prince William was already fed up with Camilla Parker-Bowles‘ boozing and her bad treatment of his wife Kate Middleton, the Duchess of Cambridge. Now with the birth of his son Prince George he has had enough and is letting her know it.  Camilla has become enraged with jealously since the birth of the new little prince and William told Camilla, “You need help – now!” He is fed up with her drowning herself in a bottle of Gin.

Not only is Camilla drinking through the Palace’s liquor collection but her taunting of Kate has risen to another level.  According to The Examiner, “the taunting, the jibes and the snide remarks have only escalated since little George was born.  And when Camilla’s knocking back the booze, well, let’s just say she isn’t a pleasant drunk.”

Camilla has had two stints in rehab, the most recent last year when William’s father Prince Charles shipped her off for a, “spiritual healing private holiday.”  Which translates, rehab in India to the tune of $50,000.

Camilla hoped that when Kate produced an heir, he would tire of her but it looks like that is not what is happening any time soon.  William and Kate seem more in love than ever.  That has pushed Camilla over the edge and her drinking is out-of-control. William and Kate want to bar her from seeing their new son.  It’s a sticky situation for William because Charles dotes on the new little Prince.

Regardless, William had a palace showdown and told Camilla to get her out-of-control drinking under control or she was banned from the royal nursery.