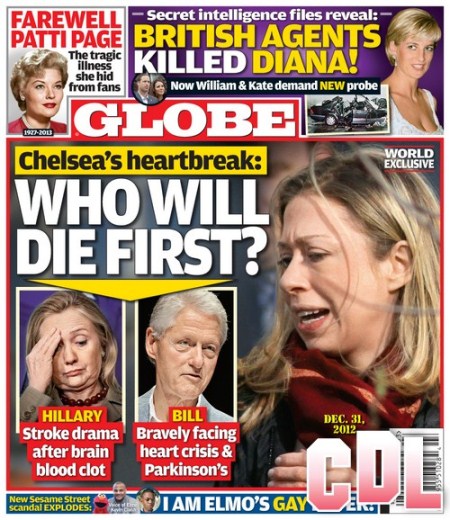 British agents killed Princess Diana according to secret intelligence files reports GLOBE on this week’s cover!  Naturally Prince William is upset at this news and he and his pregnant wife, Kate Middleton are demanding a new probe into the allegations.  Prince Harry is also disturbed by this revelation and will no doubt throw his support behind his brother and sister-in-law.  Since Diana died in a tragic car crash many have questioned the official story that her death was accidental.

The night Diana died she was out partying with boyfriend Dodi Al-Fayed and on their drive home they were pursued by rabid paparazzi.  Their driver, Henri Paul, was both drunk and on other psychoactive drugs and crashed the car while speeding away from the hungry paps.  After a lengthy judicial investigation by French authorities it was determined that Di’s death was all the fault of the drunk chauffeur/bodyguard Paul.  The official report mentioned that Diana was not wearing a seat belt at the time of the crash and that contributed to the tragedy.

That’s the Official Story – but many people, including Dodi’s billionaire papa, Mohamed Al-Fayed and author John Morgan remain convinced that the Royal family co-opted the British Secret Service to kill his son and Princess Diana.  GLOBE will uncover the possible motives and evidence behind this conspiracy in the January 21st print edition.  Some people are convinced that Diana had information that was so damaging to the Royal Family that they couldn’t let her live for fear she would spill the secrets to the press.  Is this true?  I can count on GLOBE to steer me straight through these tricky waters.

GLOBE has a feature farewell to the great singer Patti Page in this week’s issue.  We we will learn about the tragic illness that she hid from her beloved fans. Patti was one of those talents that comes along only rarely and we are sad to see her go.

On the cover of this week’s GLOBE we learn of Chelsea Clinton’s heartbreak as she now faces the loss of both her parents.  Bill Clinton has advanced heart disease and has already has open heart surgery more than once while Hillary Rodham Clinton recently suffered a stroke.

This week’s GLOBE could blow the lid off of the decades’ long Diana death mystery.  The revelation of the details of what is in the secret service intelligence files could result in the biggest scandal to hit the royals since Prince Charles and Camilla Parker-Bowles’ adulterous affair.  My copy of GLOBE will be waiting for me as soon as I get home tonight. I wouldn’t miss one word of the fascinating news between GLOBE’s covers this week.  GLOBE never let’s an exciting story go by without providing readers with detailed entertaining coverage that other sources just can’t obtain.  That’s why GLOBE is my favorite news source each week.