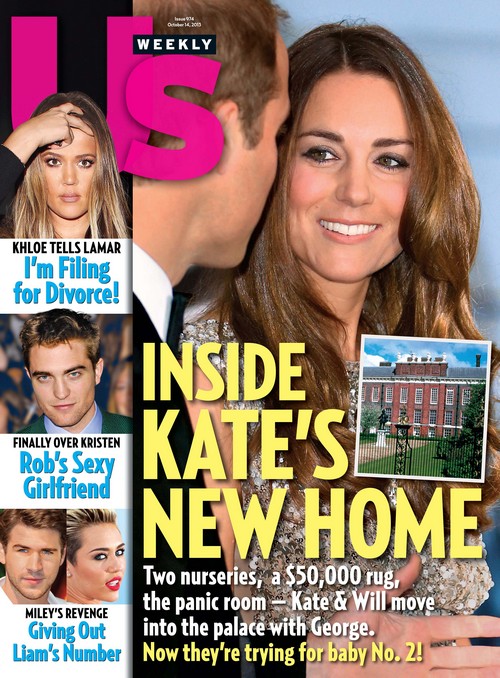 It has been a season of change for Kate Middleton. On top of adjusting to being a new mom to Prince George she also has her husband, Prince William now enjoying civilian life with her for the first time ever. The couple has also moved into a completely renovated huge apartment in Kensington Palace. Don’t let the word “apartment” fool you. According to the Oct. 14th print edition of US Weekly the new digs include two fabulous nurseries and a panic room.

There have been some conflicting reports regarding baby number two. Some outlets have reported that Kate has been dealing with postpartum depression while others such as US insist that she and William are already on track for baby number two. What we know for sure is that Kate’s original plan was to aim for 3 kids within five years so if that is still the time frame that she is working with then a second child will be coming along fairly soon.

How angry is Miley Cyrus at Liam Hemsworth? The actor is carving out a nice almost A-list career for himself and supposedly handled Miley gently during their split which actually happened months ago. He gave her time to come to terms with things before making the break up public knowledge but even that wasn’t enough for hot mess Miley. According to US Weekly she has retaliated by handing out Liam’s phone number like I would pass out Tic Tacs. He must be so glad to finally move on from her, don’t you think?

Speaking of moving on, Robert Pattinson is finally over that messy relationship that he had with Kristen Stewart and his new galpal is a total upgrade! Will he and Dylan Penn emerge as a solid couple? Tell us about your thoughts in the comments below!