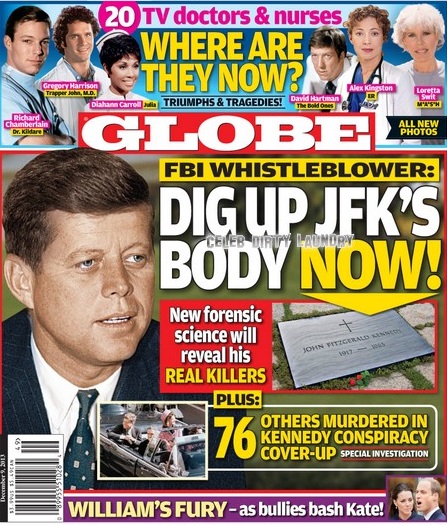 Princess Diana no doubt would be proud of the man that her son, Prince William has turned into. He has also proven himself to be a fantastic husband to Kate Middleton and so it’s not at all surprising to hear that he is seething because of how his wife has been treated recently. Kate has taken hits from many sides since delivering Prince George back in July. First she has had to contend with evil monster-in-law, Camilla Parker-Bowles who has a personal axe to grind. Good ole drunken Cami realizes that the possibility of her being queen is slim to none thanks in part to Kate providing a royal heir. She has taken verbal shots at Kate at every given opportunity until Queen Elizabeth finally put her in her place during George’s christening. Camilla was banished to India to dry out but the peace for Kate was short lived.

According to the Dec. 9th print edition of GLOBE Magazine Kate’s appearance and demeanor are now being analyzed by critical royal watchers. The new mom has been shredded for daring to step out with a touch of grey roots showing and then there was her quirky moment at a solemn Veteran’s Day ceremony. Kate is slowly bouncing back from a few months of postpartum depression which only makes William that much more protective of her. Little things that would have once rolled off the Duchess’ back are weighing a bit more heavily and William is furious with any one daring to take aim at Kate.

GLOBE is known for its fascinating stories about JFK and it seems that they’ve uncovered a new angle to the 50-year story that still keeps people intrigued. An FBI informant connected to the case is insisting that if they were to dig up JFK’s body they would uncover new forensic evidence that would unveil Kennedy’s real killers. The informant also alleges that 76 others were murdered in an attempt to cover up the crime.

Who doesn’t like medical dramas? I mean, there are always a few playing each week on prime time television so obviously there is a built in audience and in the Dec. 9th print edition of GLOBE you can catch up with some of your favorites from old shows. Find out what ER’s Alex Kingston, MASH’s Loretta Swift, Trapper John MD’s Gregory Harrison and a bunch of others are all doing now. In the meantime, what medical drama is your all-time favorite? Tell us in the comments below!

This week’s GLOBE provides plenty of top level Holiday reading.  While I’m cooking my turkey and waiting for guests to arrive I’ll be catching up with all of GLOBE’s news. This way I’ll have plenty of exciting and informative conversation ready with which to entertain my family and friends.  I can always count on GLOBE to provide a unique spice in my life.  Happy Thanksgiving everyone!!