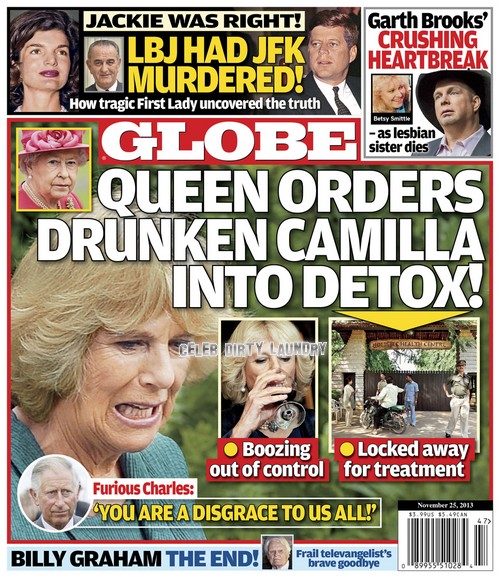 We have been telling you for months about Camilla Parker-Bowles’ behavior and how she has completely spiraled out of control. The birth of Prince George combined with the reality that her husband, Prince Charles, would likely never be King caused her to hit the bottle even harder than usual. By the time the littlest prince was christened a few weeks ago, Camilla showed up in rare form, ready for battle. She took aim at Kate Middleton, trying to rattle the new mom even more than usual and that’s when the Queen intervened. There’s a pattern that I’ve noticed and that’s that if you fall out of favor with Elizabeth you’re ass will be on a plane to Timbuktu almost overnight. Just ask Harry about Afghanistan if you don’t believe me!

Needless to say, good ole Camilla and Prince Charles were shuttled off to India for a 9 day good will mission, which is hilarious when you take into account the fact that they are barely speaking. According to the Nov. 25th print edition of GLOBE Magazine, during this trip the queen has ordered Camilla to dry herself out. Since alcohol is frowned upon in India that should help Elizabeth’s cause! Charles is fed up with his wife’s heavy duty boozing problem and is tired of being disgraced by her horrid behavior. The royals are in agreement that Camilla needs serious detoxing and GLOBE has all of the inside scoop.

Also in the Nov. 25th issue you can read about Garth Brooks‘ latest drama as he tries to cope with the loss of his lesbian sister.

Billy Graham bravely bids his flock of millions farewell as age and illness creep up on the televangelist and brilliant orator – and GLOBE has all the details.

As usual, GLOBE is adding brand new information on an important story. JFK’s assassination has never really been put to rest. There are always conspiracy theories swirling and the latest one has LBJ being the one who hired the legendary hit. Supposedly Jackie Kennedy believed this to be the case and now there is more information to bolster that notion.

Grab yourself a copy of the Nov. 25th GLOBE for these stories and many more! In the meantime, do you think that Camilla will ever totally dry out? Or is it once a drunk always a drunk in her case? One thing you know is that each week GLOBE brings you the best in entertaining news – no other news magazine compares.