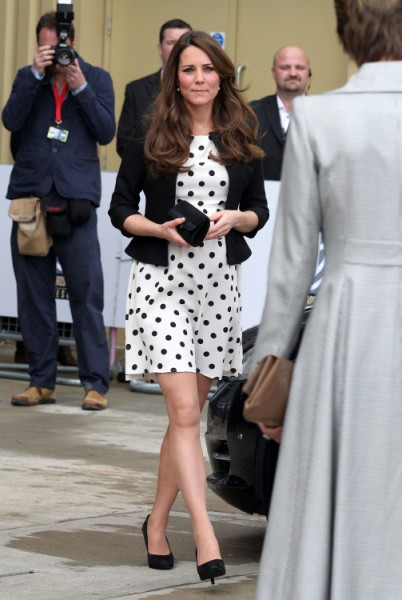 Kate Middleton’s baby isn’t going to be born a middle class Berkshire baby after all. According to reports the Duchess of Cambridge has bowed to royal pressure and decided to deliver her little prince at the Lindo Wing of St Mary’s Hospital in Paddington. It’s the same posh hospital Princess Diana had Prince William.

This is a little surprising since it was widely spread that Kate wanted to have her baby at a hospital close to her parents’ place in Berkshire since she would be spending most of her time there before and and after the baby was born. It made sense logistically but perhaps not royally. Queen Elizabeth must have thought it was bad enough her great grandson was spending his first month with the Middletons – she didn’t want his first breath of life to be at a common one as well. The royals pander to Kate and William but they do have their limits.

If Kate truly does decide to go with Diana’s old hospital I think it will have more to do with security and media ease. Let’s face it. None of us can wait to see Kate and William exit the hospital with that little bundle in their arms. The pics are a must and William and Kate won’t be able to weasel out of doing the photo op. Can a “bumpkin” Berkshire hospital handle that type of hysteria? This couple has had it’s share of hospital disasters so this has to go down without a hitch. Oddly enough, I heard Kate could walk out with a fake baby so as not to trip and fall from the nerves and hormones raging from the day. Did we see a good glimpse of William’s face when Diana brought him home? I can’t find one so maybe that would work. The crazy things people think of….

Are you surprised to hear Kate Middleton’s delivering at the posh hospital instead of the hometown one? Do you think the royal family had anything to do with that decision?