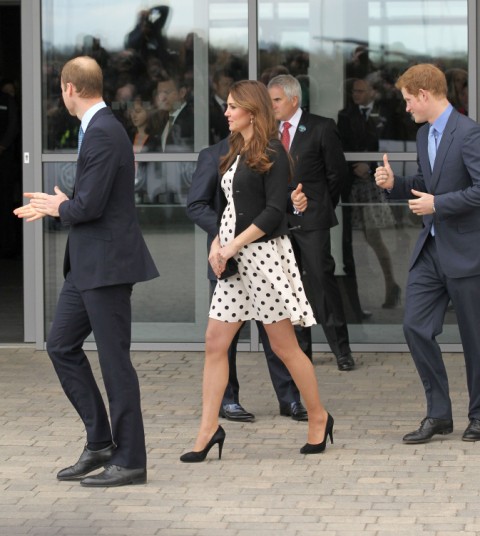 I’ve already told you it’s going to be a little prince but I guess we needed Prince Harry to confirm it! Of course he did! It’s Harry. He probably had a few too many and spilled the news to everyone in the pub. But why slap his wrist? He’s excited and that only makes him sexier, no?

“Harry has been telling everyone Wills and Kate are having a boy and how thrilled he is at the prospect of having a little nephew. He said the whole family were excited about it. Apparently Kate has always wanted a boy. The close inner circle all know that it’s a boy and they’re busily buying gifts with a boy theme. There will be an awful lot if blue in their house,” a source told the Sunday People.

It’s a boy! The blue pram story really gave it away for me but I’ll feel like such an asshole if it’s actually a girl. I’m not gonna lie, I kinda wanted a girl. I know why Kate wanted the boy. It takes a lot of pressure off fulfilling the demands of the monarchy on the first go but we haven’t had any princesses directly in the line for the throne in so long! The dresses would been so adorbs! Still, a little prince will be cute too and, since Kim Kardashian is having a girl and relocating to Paris, there might be a smutty hook up in a couple years. That’s always something to look forward to.

Are you shocked Prince Harry revealed the sex of Kate Middleton’s baby? Who else was going to do it? Pippa’s on her best behavior and Fergie was definitely left out of the loop. I hate it when the black sheep are acting all proper like!