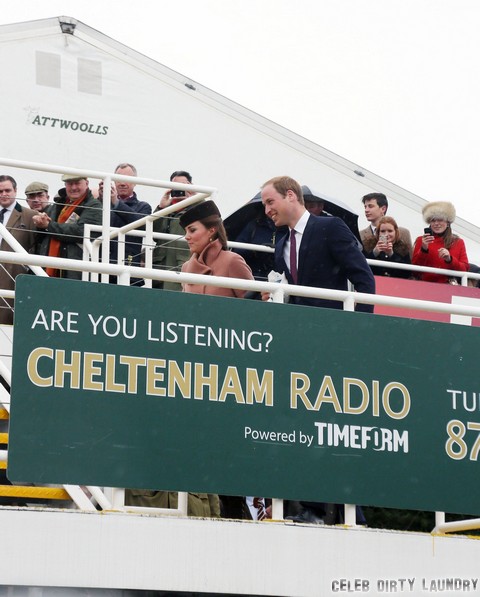 Duchess of Cambridge Kate Middleton has decided to step outside with her husband Prince William! Unfortunately for her loyal fans, subjects and followers, the Duchess opted to hide her baby bump as the royal couple attended the 2013 Cheltenham Festival Horse Races. Oh the humanity!

She has had a tough time of it with her first pregnancy, after suffering from acute morning sickness. But, thankfully it appears that Her Royal Highness is finally completely past that. Indeed, she is obviously well enough to spend a ton of money on taking vacations, then she could certainly show up for some horse racing.

Of course, it would have been nicer if the Duchess were able to give her subjects a peek at her growing royal baby bump, but perhaps that is just asking way too much. Sure, she was showing it off just by being there, but can’t we get a better look???

From the top photo, it appears that she is hiding behind that huge sign, doesn’t it? At least she’s obviously feeling better. Maybe it’s all of that fun in the sun that made her feel better?

The Duke and Duchess of Cambridge, Prince William and Kate Middleton, arrive at The 2013 Cheltenham Festival on March 15, 2013 in Cheltenham, England.