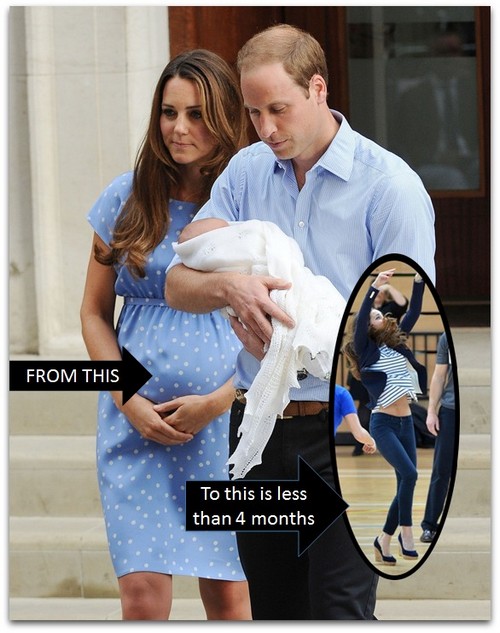 Kate Middleton the Duchess of Cambridge headed out for her first solo public appearance since the birth of her son Prince George on July 22nd, 2013 with her husband Prince William.  Kate attended a SportsAid Athlete Workshop at the Copper Box in London’s Queen Elizabeth Olympic Park.

Kate looked happy as she waved to the crowd wearing a Ralph Lauren blue blazer, her favorite J Brand skinny jeans, a nautical top and wedges.   The crowd was wowed, a scant four-months after the birth of her son Kate is looking amazing with not one pound left to lose.

At the event, Kate watched some of the athletes playing and spoke to some volleyball players who encouraged Kate to give it a try.  They finally convinced her to give it a try, she told the players she would do her best.

So off to the court Kate headed in her high-heel wedges to play.  Kate jumped for the ball and played along with the players.  That is where we got a look at Kate’s very flat stomach.  The top that Kate was wearing was a loose at the bottom and when Kate jumped and volleyed, up went her top and we got a look at just how toned her abs are.  Kate had so much fun later they asked her to fence but she had to decline, she told the athletes, “I’ve brought the wrong shoes.”

While Kate gave us a glimpse of her toned body during a sporting event, reality star Kim Kardashian decided to show her post-baby body through Instagram.  Kim gave birth to her son around the same time as Kate did decided and yesterday decided ti was time for the big reveal.  She uploaded a racy photo to her Instagram account so we could catch a glimpse.  As usual, Kate keeping it classy and Kim keeping it trashy.

Meanwhile Kate’s husband played Daddy duty staying home with little Georgie.  The tike is to be christened on October 23rd, 2013 by the Archbishop of Canterbury, Justin Welby.