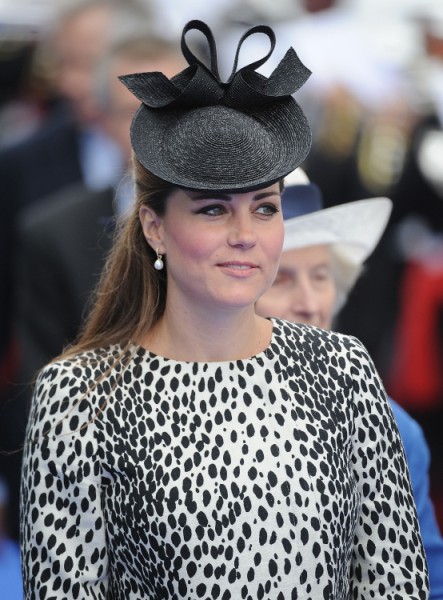 Well this is a highly frustrating warning considering she’s taking the royal baby to her parents’ home for six weeks after the birth….

But Berkshire may not be the safest place, far from it claims former royal bodyguard Ken Wharfe. He told the Daily Star the cost implications of her staying there would be a nightmare and local residents would soon resent the family for bringing all that paparazzi hell down on them.

I’m sure it would probably be a little annoying but I doubt the people of Berkshire would shy away from having their future monarch chill in their neck of the woods for awhile. There’s a sense of pride there. Everyone’s already making a big deal out of the fact that the kid will be raised more Middleton than Windsor and that Carole Middleton might even know everything about the royal baby after it’s born before the Queen. Let them have their six weeks. They’ve been planning this for awhile now and I’m pretty sure they’re taking on most of the bill. Royal baby security is top priority. I’m sure they’re on it. The Middletons rarely foul up – except for Pippa and James that is.

In other news, Kate is missing the biggest wedding of the year!!! I’m so excited for the gossip that’s going to come out of this weekend. Princes William and Harry’s best friend, Thomas Van Straubenzee, is finally marrying that Percy girl. So everyone’s going to be there. William, Pippa, Cressida Bonas and… Chelsy Davy. In fact, dear Chelsy is the maid of honor. I can’t wait to hear what Harry does. Will he hook back up with his old flame or will Cressida keep him on a tight leash? Should be VERY interesting. But Kate is opting out because she doesn’t want to chance going into labor during the 300 mile trek to Alnwick Castle in Northumberland. FYI it’s the castle they modeled Hogwarts after. I freakin’ hate these rich people but love them at the same time. Kate is supposed to be heartbroken over the decision which easily leads me to believe it was made for her by the palace. Who warned Kate Middleton this time? God I would hate being told what to do all the time. Are they commands or just serious suggestions? Does the Queen bother to command? I’d gather her opinion is enough to settle a matter. Hopefully William texts her the play by play and can get a good phone pic of Harry making out with Chelsy under some 600-year-old historic relic.