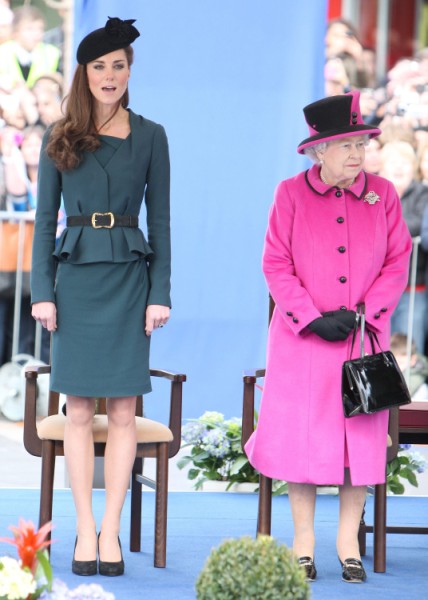 And somewhere Rodney Dangerfield is wrestling his tie saying, “No respect. No respect I tell ya.” Too obscure for you young-ins? Maybe.

I know this is just a formality but Queen Elizabeth’s new decree reminds me of the silly curtsying rules that came into effect after Kate Middleton joined the royal family. Does she have to curtsy to her son/daughter now? It will have a higher rank after all. I would love to see the snooty little monster try it in a couple years when his mom pisses him off.

For Kate Middleton’s birthday yesterday, the Queen bestowed her greatest gift – that all of Kate and William’s children will be titled princes/princesses. That was a no-brainer, right? But I guess it wasn’t that straightforward. Thanks to old rules, only the eldest son of the eldest son of the Prince of Wales got the prince title. The other kids would be Lords and Ladies – even if a girl was born first. God this is stupid.

I think this is so confusing because we haven’t dealt with something like this in awhile. We didn’t have this issue with Prince Charles because he is the Prince of Wales and Diana was the Princess of Wales so all of their children would be princes/princesses. William (and maybe Kate) are the heirs to the thrown but their titles will be screwy until some old people pass on. So, in essence, Kate Middleton’s baby princess will rank higher on paper until Queen Elizabeth dies and Kate becomes the new Princess of Wales. Princesses of the blood trump Berkshire Duchesses any day.

Still, it might seem like a kick in the crotch but it’s actually a super cool thing the Queen is doing. She’s changing the law to give all of Kate and Will’s potential kids the respect they deserve as heirs to the throne especially since the new succession laws are going to be changed. If Kate and William have a girl that girl will be probably be Queen one day. You can’t go around calling a future Queen Lady, can you? What will the people think? It’s bad enough those kids will have Middletons for grandparents!

Are you surprised Kate Middleton’s princess was in danger of being a Lady?