Kate Middleton Told To Wait Her Turn, Camilla Parker-Bowles Fighting To Be Queen 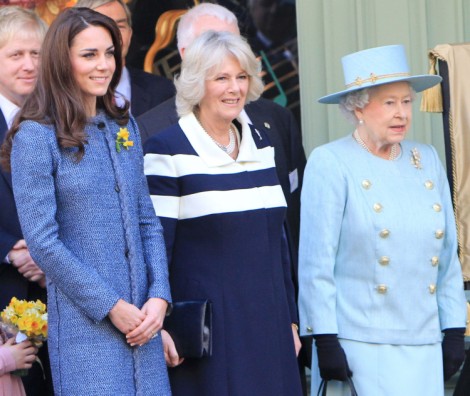 This is all getting pretty interesting. It seems there might be a Queen Camilla after all.

After word got out yesterday that Prince Charles had given up on his second wife’s right to be Queen at his side, the prince quickly changed his tune. It all started with a Frequently Asked Questions answer on his official website. In response to the question, “Will The Duchess become Queen when The Prince becomes King?” the site replied, “As was explained at the time of their wedding in April 2005, it is intended that The Duchess will be known as HRH The Princess Consort when The Prince of Wales accedes to The Throne.”

Hold your grubby little fingers Kate Middleton! Camilla Parker Bowles didn’t like that answer too much. Tom Sykes at The Daily Beast got a statement from Charles and Camilla’s spokesperson reading: “Our position has not changed. The intention is that The Duchess will be known as Princess Consort at the time of succession. However, as we’ve always said it is a decision to be taken at the time, whenever in the future that might be.”

So, what now? Charles doesn’t want to rock the boat too much when he ascends to the thrown so he’ll keep Camilla as Princess Consort but the second everyone gets more comfortable with him then he’ll make the magic happen? Very savvy Charles. Very savvy indeed. And can you blame him? The dude is the longest running Prince of Wales in history. Maybe that’s why he likes Kate Middleton so much – he’s great at waiting too! Can we all just give him a break and let his wife be Queen? How many years will they actually be monarchs? Ten? Twenty? Female Windsors seem to live forever – not so much the men. Neither his grandfather nor his great grandfather on his mother’s side lived past 71 whereas the women live to be like 200 or something. I’m not counting the days until his death, I’m just saying I doubt his reign will be as long as his mother’s obviously. So can all of us pro-Diana sympathizers out there put our angst aside and let the woman that Prince Charles wanted to be a tampon for rule at his side?

Think how much fun a Queen Camilla will be! She’ll impress us with her fashion! She’ll combat land mines! She’ll bring the words hip and fun to the monarchy again! Oh wait… no, she won’t do any of those things. But if you’re Kate Middleton, you’ve got to be hoping for this right? Middletons aren’t anything if not advantageous but it might be best to let Camilla in there to muck things up before you had to be the figurehead. Following Queen Elizabeth is a losing battle. No one does solemnity and routine like that woman. Kate would get chewed up. But following Camilla… not such a bad gig. Doable. I heard the Queen and Prince Philip are uncomfortable with Charles and Camilla’s spending habits. The aging monarchs are horribly frugal and old-fashioned. So not only will Kate bring sexy back to Buckingham but she’ll also bring the Queen’s sense of discipline and cheapness. The people will eat that up! Very savvy Kate. Very savvy indeed. That third PR man is coming in handy already!