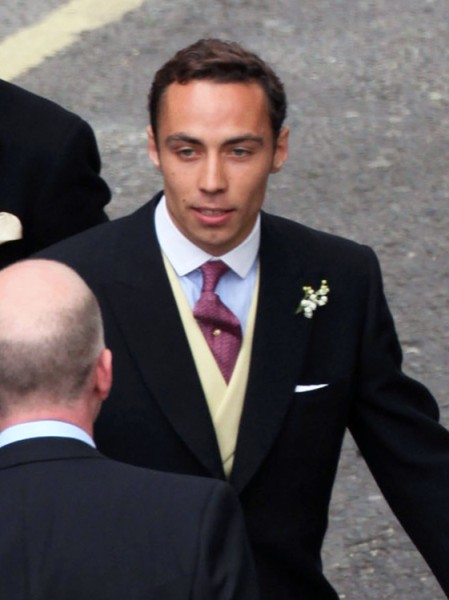 Can the royal heir baby have a gay uncle? Is that too modern for the royal family? It will be the first baby with common grandparents so perhaps that’s as modern as the Windsors are willing to go this time around. But James Middleton is not gay. He swears! He swears so much he actually had a friend defend him to the Daily Mail. Does that sound sketchy to anyone else?

But that’s not the only explaining he did. Kate Middleton’s brother actually set the record straight with a DM reporter last week. Not only did he stand up for his cake business and deny its financial issues but he also said he was not considering a role on a popular UK reality show. They were just “speculated rumors” his family has become “so used to”. Oh, poor Middletons. They love the shine but hate the glare. If the interview would have stopped there it wouldn’t really have been a big deal. But James authorized one of his friends to speak on his behalf about being gay.

“Believe me,” she said, “anyone who has known James for any length of time would know that’s nonsense. He’s just a heterosexual 25-year-old who is in no rush to couple up and seems happy with the single life.” Another friend added. “If you’ve ever heard James talk privately about girls, you’d know he’s not gay. But he’s not that bothered by the rumors, either. He’s quite ‘meterosexual’ so, in a way, he takes it as a compliment.”

Um… actually he is bothered by the rumors because he just asked not one but two friends to deny them to a tabloidy UK newspaper. How the hell did the Middletons sign off on this? They never talk. Never. In fact, Kate went ten years before she was properly heard on camera. Yes, they’ve always given their side of events via “anonymous sources” but nothing like this. It’s actually kind of crazy weird. Either James is super tired of people thinking he’s gay or the Middleton family is doing some major PR because his business/personal persona is hurting the family name. And we all thought Pippa Middleton would bring the shame!

Queen Elizabeth is pursing her lips somewhere. I can feel it! Ironically enough though she’s out championing gay rights and gender equality this week. So is this double bad timing for the Middletons? Was it smart to deny being gay the same week the Queen fights for gay rights in what the press is dubbing a “historic pledge”?

Is James Middleton gay or was this just a badly thought out interview?