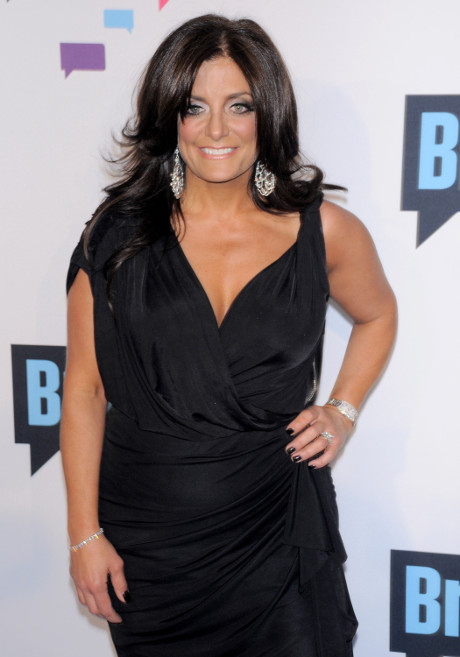 Real Housewives of New Jersey stars Kathy Wakile and Rosie Pierri were guests on Watch What Happens Live on July 14. The sisters answered questions regarding that night’s episode of RHONJ but also had some fun with host Andy Cohen.

The first thing I noticed was a big blob (Kathy) in a green strapless dress. She looks like she stuffed herself in it. The dress made Kathy’s breasts look much bigger than usual. That particular shade of green made her look sickly, like she ate one too many of her own cannolis. Rosie has slimmed down and she looks fantastic! Her outfit, however, leaves a lot to be desired. The first caller of the night said Rosie’s orange shirt and tan pants look like something Barbara Bush would wear!! Rosie and Kathy had a good laugh, and Rosie responded that she is dressing better now that she lost weight and can fit into some different items.

Next, Andy plugged Kathy’s cannoli business. After all, she has nothing to contribute and he has to make conversation with her. Andy then asked Kathy and Rosie about the ongoing family feud. He wanted to know if they felt Teresa was completely at fault for all of the family problems. Kathy said everyone was at fault for all of the fighting. It’s nice to hear the Kathy The Martyr say she had a part in this mess. Usually she is pointing the finger at Teresa.

The next part of the show was all about fun! Andy made reference to Kathy’s breasts asking if she had more plastic surgery. The Martyr responded she just gained weight. Kathy doesn’t need anymore plastic surgery. She looked better two faces ago. Andy noticed Kathy’s lips were toned down and gave Kathy a compliment.

Game time was predictable. The sisters played Find the Cannoli. Of course Andy has to plug Kathy’s business again. She isn’t on the show because she is an interesting guest. The game involved Rosie being blindfolded with Ramona eyes and she had to find the three cannolis Kathy hid on the set. Rosie could only use Kathy’s voice to guide her. It was not fun to watch. The game didn’t have anyone squirming in their chairs or doing dares.

The one interesting thing about this episode was Andy’s big announcement. Andy became ordained to perform weddings and he would be officiating a wedding on the show. Thank goodness the show is only a half hour long.