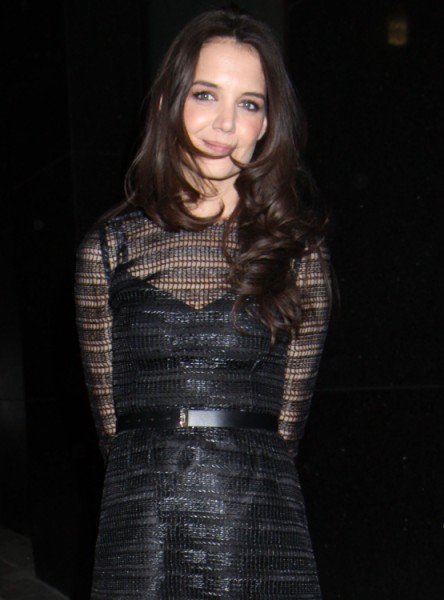 I doubt it considering those two probably haven’t stepped in the same room together in over six months but let’s not focus on those terrifying days. Katie Holmes’ singing career is blossoming! Well… she’s looking for a place to sing and, like so many before her, she’s got her sights set on Broadway. Katie Holmes is hoping for a second chance. I know. I know. It didn’t go so well the first time around. Her play, Dead Accounts, closed early due to lack of ticket sales. But we know the problem now! Katie wasn’t giving it her all. She wasn’t showing her true potential. She wasn’t showcasing those pipes! I see asses in seats now for sure!

This is quite the new year for Ms. Holmes. She just told Allure magazine she was open to the idea of having more children and now we have a broadway singing career. What a difference a year (and a divorce from a crazy person) make. Naturally her people are already on to the story and have denied it but Page Six reports she might start recording classic tunes with pianist Peter Cincotti to convince people she’s serious. Apparently there’s been resistance. What? Why?! She’s a triple threat. She obviously can dance and haven’t they seen this? What more do you need?!

So is this the best idea for a comeback? I understand she wants to stay in NYC for Suri Cruise but I’m not so sure. After hearing she was yucking it up in LA during the Oscars I assumed she’s be back on the big/small screen in no time. Singing on Broadway is about as far away from that as you can get. I get that she wants to prove her chops. I get she wants to escape out of her Stepford Mrs. Tom Cruise shadow but another lukewarm performance isn’t going to do that. It’ll only hurt her career more. Is it shitty if I hope this doesn’t happen for her? I’m really only looking out for her best interest. Now, on the other hand, if she could get Tommy on the stage with her that would be something else entirely but that would mean she would have to share the spotlight and I’m getting the feeling Katie is done with that for awhile.

Do you think Katie has what it takes to sing on Broadway?