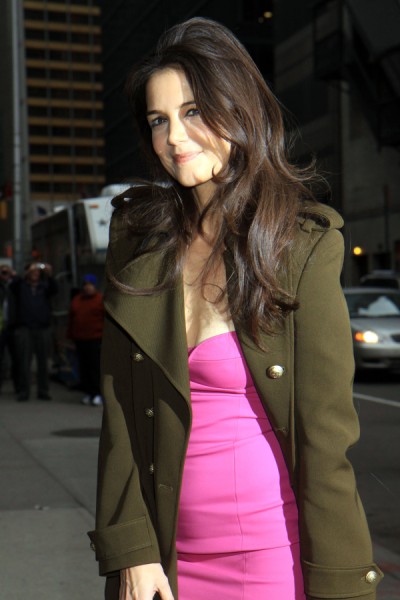 Does that mean Tom Cruise is Mr. Big? Oh Lord, do you have any idea how much that hobbit probably loves that? He’s giggling with glee as we speak! But Katie Holmes as the new Carrie Bradshaw? Does Katie look like she’s had half as much sex as Carrie? That’s obviously post-Tom since many of us out there doubt anything even happened in Mr. and Mrs. Cruise’s boudoir. Still… this is a stretch for me but apparently not for Katie’s friends who are letting the whole world in on Katie Holmes’ new, glamorous, and very free lifestyle.

Incidentally, this whole conversation stems from Katie’s recent career setbacks. We talked about them a little yesterday. Since Katie’s play shut down and her fashion line is on permanent (?) hiatus, Huffington Post reached out to her people to see if she would be moving out of NYC but Katie’s publicist denied a move citing NYC as her home where Suri is busy freaking the kids out at her crazy expensive school. But Katie’s “friend” had to make the dream just a little more exciting. “Katie is in love with this city. After being very isolated while married to Tom, she is now enjoying single life in New York,” the friend said. “She knows all the cool spots to eat, meet friends or hang out. She’s become a real-life version of Carrie Bradshaw as far as her love affair with the city.”

New York City = Katie Holmes’ salvation from Tom! It’s the place where dreams come true and ex-husbands can’t steal their children back! It’s the place you can go bowling! You heard me. This story coincides well with reports from the New York Post this morning spotting Katie bowling with a mystery man at Lucky Strike Lanes in Hell’s Kitchen on Wednesday night. They had some beers but witnesses said no flirting was happening. But get this. She was wearing floral overalls!! Amazing reporting! Is bowling in floral overalls something Carrie Bradshaw would do? I could see it.

But I’m still not sold on the comparison as a whole. She’s a single gal in NYC but I’m not sure she has enough of the joie de vivre to compare herself to Carrie Bradshaw. Katie Holmes still has yet to show me Tommy didn’t audit it all out of her. Where do you lean in the whole thing?