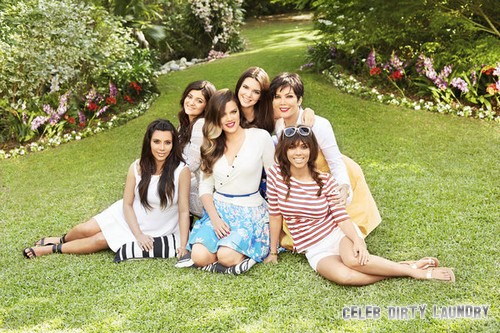 Tonight on E! KEEPING UP WITH THE KARDASHIANS continues with another new episode called, “Baby Shower Blues.” On tonight’s show Kylie and Kris devise a plan to get Bruce’s gun out of the house. Khloe feels self-conscious about her body.  Did you watch the last episode before the hiatus, season 8 episode 14? We did and we recapped it here for you.

On last episode Khloe tried to figure out what was causing her memory issues. Meanwhile, Kris was confused when Kendall started spending more time with the Jenner side of the family and the kids attempted to embarrass Bruce by digging up his and Kris’s old sex tape.  Bruce lets the kids know that they erased the tape right after they made it.

On tonight’s show Kourtney and Khloe can’t believe that Kim doesn’t want a baby shower, so they plan one behind her back. Meanwhile, Kris and Kylie plot to get rid of Bruce’s gun and Khloe gets self-conscious about her body.

RECAP: Khloe hits the gym with Pia and Kylie, each of them are tying to do some sort of physical activity; none of them know what they’re doing at all. Khloe keeps mentioning how Kylie and Pia don’t know what they’re doing.It cuts to Khloe visiting Sharon the event planner for their upcoming party, Khloe and Kourtney are planning a baby shower for Kim. They’re speaking about the layout and the invitations for the upcoming event, and they end up getting it done. Kylie is at home speaking to her father who’s holding a gun in the living room. Everyone begins to arrive to the pajama jammy jam, Khloe, Kourtney and several of their friends. They’re speaking about womanly problems. It cuts to the Jenner beach house, Kylie is talking to her mother about Bruce’s gun and seeing him cleaning it, also how it scares her. Kris Jenner decides that her and Kylie should go and hide Bruce’s gun, to get rid of it. They go out looking for it, but don’t find it at all. Kris Jenner comes up with a plan to pretend to like guns and then find a way to get rid of it while deceiving him. Then it cuts to a photo shoot for Kim, with her friends being their with her and Khloe. They mention how they’re planning Kim’s baby shower, but Kim doesn’t really care about it much and doesn’t want her being pregnant to be such a big deal. Khloe wants Kim to want a baby shower, because Khloe and Kourtney have put a lot of planning into it.

Kourtney has to speak on a panel about fashion, she’s excited because it’s what she loves and is passionate about. Kris Jenner, tells Kourtney that Kim needs to have a baby shower and that it’s an important thing to have while being pregnant. Kourtney leaves the waiting room and gets on stage for the panel. Kourtney gets back home with their dog and Scotts greets them. Kourtney receives a gift that will help her with her womenly problems, Scott jokes around the entire time. It cuts to Uzen Yogurt, Kris Jenner, Bruce and Kylie are spending time together. Kris starts her plan to pretend to like firearms, Bruce is excited about the whole ordeal and wants to bring her to a shooting range. Kim calls Kourtney on the phone while she’s driving some place, Kim doesn’t want a baby shower and doesn’t want any of the gifts either. Kim decides to pay Kourtney a visit, Kim wants to know why her family wants to give her a baby shower. Kim is very against the baby shower and feels that her family is being very controlling.

Khloe is talking to her friend and is speaking about her womanly problems once again with someone, Khloe calls her mother Kris to talk about how it’s her fault that she’s gotten this problem. Kris just tells Khloe to live life and get over her problem. Kim arrives home and finds Khloe, Kris and Kourtney there waiting for her to show her how great a baby shower truly is. Kris Jenner shows them all a baby shower for Kim to understand how great it is. Kris Jenner gets a little emotional while watching the video, Kim does understand what they mean about having a baby shower, it makes her decide to have one. Kylie and Kris Jenner are at the gun range to fire some rounds, Kyle acts like a panzie and leaves because she can’t handle it. Kris is being a trooper and is actually giving it a shot, she fires a couple of rounds. Kris exits and has to also take a written test, there are 30 questions and she needs to have at least 23 right to pass the test. Kris Jenner seems to had problems answering the test, the man comes back and lets her know that she passed the test. Kim is lying in bed talking to Kourtney about her swelling feet, wondering if it has to do with her pregnancy. Kim talks about the upcoming baby shower and what she’d like to see at it. Instead of gifts Kim talks how Kanye prefers people to donate to the children’s hospital of Chicago. Kris is surprised that she actually passed the test, now she wants to get Bruce’s gun and throw it in the ocean or bury the gun. Kris and Kylie really don’t know what to do with the gun at all, now she comes up with the idea to put it in a bowl and fill it with cement.

Kris and Kylie arrive at the beach house to meet up with Bruce, Kris shows Bruce her gun certificate and she shows Bruce the target she shot. Bruce shows them both where the gun is, they now know where the gun is located. Bruce makes a comment about how Kris looks pretty hot with a gun, (I don’t see it). Now Kris and Kylie are able to destroy the gun, Bruce is in for a teat. Kourtney arrives 15 minutes late to met up with Kourtney at the gym to workout. Khloe goes home with Kylie along with Scott, they want to talk with Lamar to find out if he’s going to the baby shower. Scott and Kanye are going so they want Lamar to go, they’ll be coming to just say hi near the end of the baby shower. Kris goes and gets Kylie while Bruce isn’t home, now Kris is going to put the gun in cement. Now Kris and Kylie successfully cover the gun in cement and are going to hide the evidence.

Kris feels fat, Khloe reads out that TMZ has already discovered the baby shower, turns out that the Kardashian family isn’t happy to find this out. They joke around saying that the information was from Kris Jenner, Kourtney doesn’t want someone to ruin Kim’s baby shower since she’s already decided to have one. They all tell Kim not to worry about it much. Bruce arrives home, Kirs finds sandals that aren’t hers and Kylie doesn’t know who’s it is either. Bruce brings in a surprise and it turns out that his gift to her is a gun, a 9mm to be exact. Bruce goes downstairs to get the other gun, though it turns out he can’t find it.

Bruce finds out that the gun is not where he left it, he’s clearly not happy at all. Kris and Kylie lead Bruce to the cement block containing the gun, they get it and show Bruce it. Bruce is not pleased at all, Kris puts the blame on Kylie. Kris Jenner and Kylie tell Bruce they feel better about their not being one. Bruce will take the one upstairs instead, Kris accepts that she’ll let Bruce have his gun. Everything she did to try and get rid of the gun was for nothing. Now it’s the time for the baby shower, Kris is thanking Kanye’s family for being there., Kim and Khloe are greeting many people. Kim is happy with the outcome of the baby shower, it’s everything she wanted it to be. Kris gives a toast to Kim and is feeling a little emotional, everyone claps when she finishes. Kim believes that what drives her mother is family. Now they begin to play baby games, Lamar and Scott arrive at the baby shower; it turns out that the both of them are far too early. Khloe isn’t pleased, because Lamar and Scott didn’t arrive at the baby shower without Kanye.

Kim is now asking where Kayne is and who he’s going to be arriving with, she looks very worried about the situation. Out of the shadows we see an image of greatness appear, then steps out Kanye glowing. Kim is very happy to see that Kanye has finally arrived and she’s also glad that her family planned this entire baby shower.