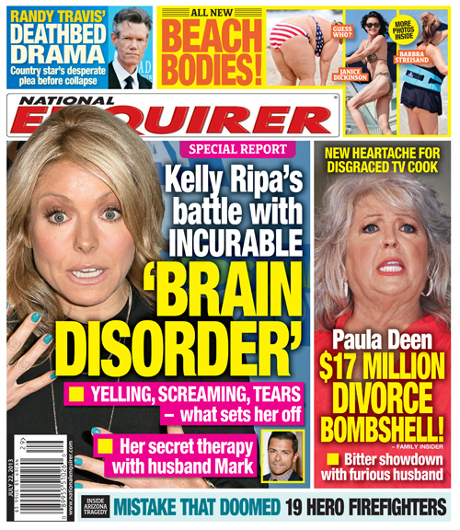 Kelly Ripa is featured on the newest edition of the National Enquirer, which states that she’s suffering from an incurable brain disorder — though the cover doesn’t state the details surrounding her ailment. It does say that she undergoes extreme bouts of rage and promises to delineate what sets her off, as well as give an inside look at her and Mark’s secret therapy sessions.

Now, I’m not sure what to think about this crazy headline, as I watch Ripa on the Live with Kelly and Michael every morning. Sure, she’s a little whacky sometimes, but I wouldn’t go so far as to say she has a brain disorder. I’m not sure what the magazine means by “disorder,” though I assume they mean psychological in origin. To get the full scoop on this story, make sure to pick up this edition of the magazine!

Also on this cover: A look inside Randy Travis’ deathbed drama, including his last plea before he collapsed; the hottest (and not so hot) beach bodies of the summer; and more Paula Deen drama, which now seems to be harming her marriage.

Is Paula Deen currently entering into a “$17 million divorce bombshell” that has her in a “bitter showdown with her furious husband?” The magazine claims this to be true, true, true, and while they might be blowing this slightly out of proportion, we wouldn’t be surprised to catch wind of a divorce in Paula’s future.

What do you think about Kelly Ripa and Paula Deen, clearly the two highest profile stories in this newest edition of the magazine? Happy tabloid Wednesday, folks!