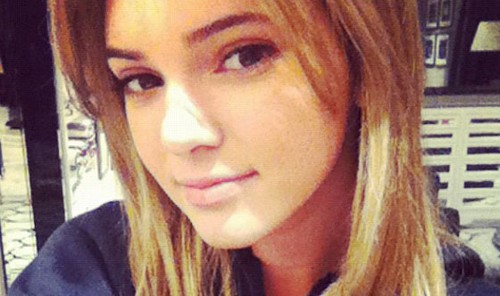 Kendall Jenner is going blonde. She has revealed her new blonde highlights and short bob in an Instagram photo, whereas she used to have long, brown hair. What is with the Kardashian sisters’ obsession with going blonde? Do we sense a Kanye West obsession with Beyonce at work here?Kendall now joins Kim Kardashian and Khloe Kardashian in the grand tradition of changing their hairstyles and hair color.

Honestly, one of the best aspects of the Kardashians was their hair, and they decided to get rid of that, too. Obviously, the only one getting attention here is Kendall, especially since she’s seemed to have collected a rather creepy fan base on the Internet that follows her every move. Kim probably thought she’d get a ton of attention with her grills and blonde hair, but she actually didn’t – although I fear for what she will do next for attention. Can Kris Jenner force Kourtney to go blonde too?  Maybe Kris herself will appear as a blonde shortly!

Khloe also showed off her blonde locks via Instagram, since I suppose debuting their new hair color on E! would be going too far, even for them. It’s hard not to wonder if the fact that all three of them went blonde around the same time is a coincidence, or if there’s more to the story. Maybe Kanye has a thing for blondes and is forcing them all to do it? Maybe they realized they wanted even more attention and figured blonde hair was the way to do it? Maybe they’re so full of it that they actually think they look good with the blonde hair?

What do you guys think about the Kardashian sisters’ new hair color? Do you like it, or do you think it looks terrible? Let us know your thoughts in the comments.