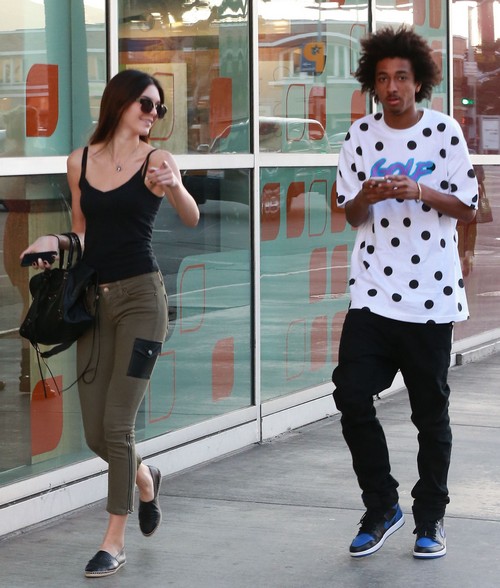 Kendall Jenner was last linked to rapper Young Jinsu, after breaking up with boyfriend Julian Brooks. However, Kendall was spotted with a mystery man while shopping in Beverly Hills yesterday, leading to questions about who exactly this man was. Is it her new boyfriend?

While some people are definitely suggesting that Kendall and this guy could have a romantic relationship, I think it’s far less likely. Think about it – when has Kendall ever dated an unknown? The Kardashian sisters don’t date people who aren’t famous, largely because it’s probably been ingrained into them by their crazy mother, Kris Jenner, who followed the same game plan and ended up with a reality empire.

And besides, looking at Kendall’s past dating history, it’s obvious that she doesn’t actually date people that could be construed as ‘mystery men’. If she’s dating someone, you will know – there will be tons of famewhorey behavior and tweets/instagrams.

So if this guy’s not her boyfriend, who could it be? Well, one suggestion is that it’s her drug dealer. She’s clearly close to the guy, and we know that Kendall is not averse to smoking pot. The guy’s definitely dressed in the sort of hippy-dippy ‘don’t care’ outfit that would suggest he’s a dealer, but there’s obviously no proof connecting him to that.

I mean, he might secretly be a billionaire and he might even be related to Young Jinsu or someone else that Kendall is close to. Obviously, she would have to know that whoever she goes out with in Beverly Hills will get papped, so it could have also been her way to shake up the Young Jinsu boyfriend rumors. See, Kendall is learning from her mother and sisters in the art of manipulating the media, and soon, we’ll have yet another Kardashian famewhore to deal with – as though we didn’t already have enough.

Update – a reader was kind enough to clear up the mystery and it seems mystery man is probably not K’s drug dealer – he is “travis bennett also known as Taco and he is a dj/rapper in the huge international rap collective: OFWGKTA“