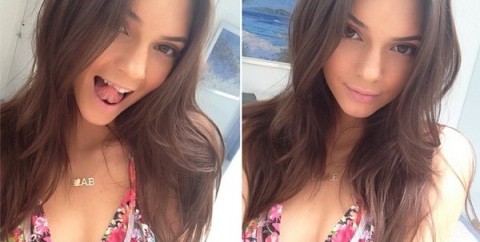 Kendall Jenner is quickly learning the family motto that you don’t get any attention unless you make a proper fool out of yourself. She just posted a video on Keek easily showing this and it’s leading some to believe the 17-year-old might be toking as well as modeling on the side.

The Kendall Jenner video which lasts about 36 seconds long shows her visibly out of it as she rambles on to the camera. Her excuse is that she’s bored and tired from the jet lag but could it be more? It’s even titled, “Out of it!”. No shit. What will momanager Kris Jenner think when she sees it? Clearly, she’s had experience with Kim Kardashian’s sex tape so a little snippet of one of her daughters acting high shouldn’t be all that much of a problem. Who knows though. She could be one of those mom that freaks out over the small things but managers to keep her shit together when the shit really hits the fan. Does anyone else remember that episode of when she freaked out at Bruce for throwing the swan pool toy away? Amazingness.

I have a much bigger issue with the fact that she takes videos of herself wearing a bikini. Honey, I know you have a dope body but come the ef on. Show some modesty. You’ve got the rest of your life to prove you’re a Kardashian. The fact that she posted a video of essentially nothing just shows me that her confidence isn’t shattered yet. I suppose that’s a good thing but still… put on a damn top.

Is Kendall Jenner stoned in her new video or just acting like a famewhorey Kardashian? Does anyone else think this is not only unnecessary but border line inappropriate?