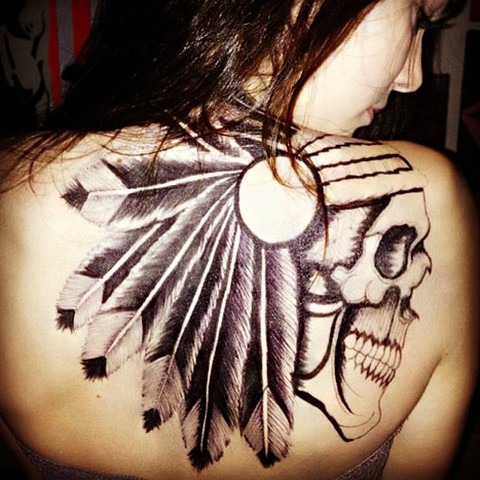 The fact that none of Kris Jenner’s children have been institutionalized by the state is a miracle—her mothering isn’t exactly legendary in a good way! Youngest daughters Kendall Jenner and Kylie Jenner have eagerly signed on to the family business, with only a few minor tweaks. The girls seem more focused on modeling than TV work, and seem way closer to whipped dad Bruce Jenner than dragon mom. Just because the girls aren’t screaming college plans from the roof doesn’t mean they don’t know how to rebel and defy their mom—Kendall showed off a new tattoo that definitely didn’t get her momager’s seal of approval!

On February 19, Kendall shared her new body art with Twitter followers. The image was designed by makeup artist Natalie Wood, and is the profile of a skull wearing a Native American tribal headdress. It’s huge too, covering her entire back. But it won’t hurt her modeling career—it’s just done in sharpie! That doesn’t mean the design isn’t a mock up of something she hopes to get when she turns 18 later this year! Remember when she and Kylie flew alone to Las Vegas so she could get a neck tat? The girl wants ink, and it’s only a matter of time.

Kendall hasn’t been on the best of terms with her mom, and insiders say she’s on Bruce’s side in every fight. But will her defiant actions get her fired by the network—and her mom? Kendall seems like a genuinely kind person, but how much will her rebelliousness affect her career? Kris doesn’t like being defied, and Kendall seems to do nothing but! Will she be the first part-Kardashian to be fired from the brand, or will they put family first and ignore the threat of her free-spirited ways? Do you think Kendall will leave the family business?