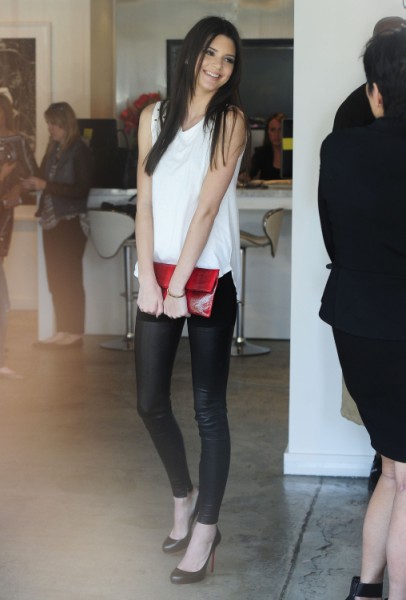 I don’t know how I feel about Kendall Jenner yet. She doesn’t bother me like the others. Kris Jenner has played it smart so far by keeping the Jenner girls away from the main focus of the show. They get their scenes but aren’t a part of the drama so negative backlash is minimal compared to the older kids. I like the fact that she’s trying to make a modeling career out of it. She’s pretty, has a great body and is a quasi-celebrity. Why not? And so far she’s had pretty decent success. But is she ready to make the jump into the big time? Is she ready to be an Angel?

Hollywood Life reports Kim Kardashian’s little sister is gearing up to be a Victoria’s Secret Model. Kendall Jenner recently said that it’s always been a dream of hers to don the wings while gliding down the catwalk.

It wouldn’t be the worst thing for VS to consider. Aren’t they trying to youth-enize the brand and go after the ‘tween market? I thought I read that somewhere. A Jenner/Kardashian would be perfect for that. Is she curvy enough though? Unlike her Kardashian sisters she doesn’t have much of a rack or an ass. I thought VS models had to be more on the voluptuous side (a.k.a. size 00 with huge tits).

And VS does have an opening after it announced Miranda Kerr was stepping down. Kendall could float on in there and take her place. It means she might have to start dating Justin Bieber though. We all know how he likes the models. Interesting enough, it was rumored Miranda cheated on Orlando Bloom with Bieber. See how everything comes full circle?!! It’s fate!

What do you think? Does Kendall have what it takes to model for VS or will she just be considered because of who her family is?