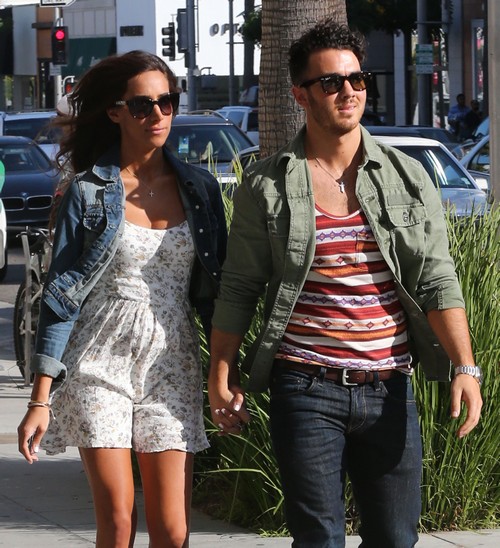 It was revealed in earlier today that Kevin Jonas and Danielle Jonas had faked their pregnancy to increase the ratings of their show, Married to Jonas, and increase interest in the Jonas Brothers’ music and tour at the same time.  Of course that was before The Jonas Brothers and their tour were extinguished, largely due to the alleged heroin addiction Joe Jonas putatively shares with Blanda Eggenshwiler.

However, now that they are not able to adopt a child in time for their ‘birth’, they’re stuck in quit a quandary. The blind item reveal on Blind Gossip states that because they’re not able to produce a child, they’re going to use the excuse of a miscarriage to explain the absence of the baby. How sick is that?

I mean, reality stars have done some low, low things to gain attention, but this has got to be one of the most desperate. I mean, faking a pregnancy is bad enough – that too, with a freaking pillow – and now, to fake a miscarriage? A miscarriage is one of the most painful things that parents have to go through, and to Danielle and Kevin, it’s just a means to an end.

The report also states that Danielle and Kevin are reportedly hoping that by announcing the miscarriage, they feel that the public will feel sorry for them and thus watch their show and buy their things. Um, are they crazy? How is feeling sorry for them supposed to engender a response to watch their television show? Why would anyone willingly put themselves in misery, which is what normal people would be dealing with if they had a miscarriage?

What do you guys think about Kevin and Danielle’s fraud pregnancy? Let us know your thoughts in the comments.