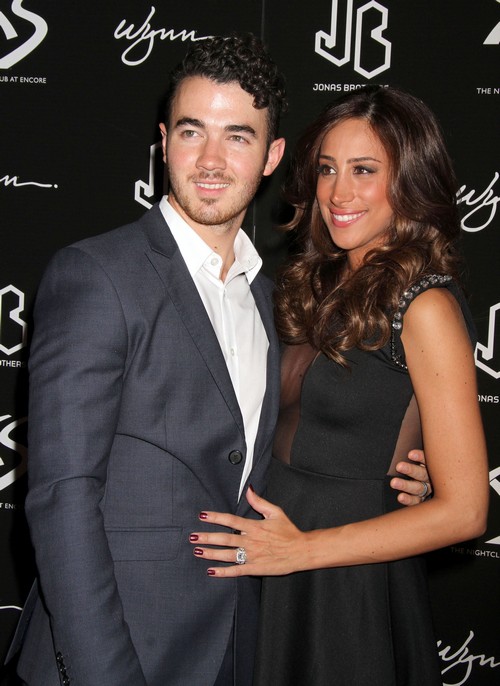 There was a blind item going around last week about a reality show couple that was so desperate for more attention and higher ratings that they actually faked a pregnancy – with a pillow! Now, that blind item has been revealed as Kevin Jonas and wife Danielle Jonas from Married to Jonas.

The reality show, produced by E!, has been doing terribly in ratings and interest in the Jonas Brothers in general has been waning over the past two years. Now, that couldn’t do, could it? Not when the brothers were planning a ‘comeback’ and Kevin & Danielle wanted to continue with their show. Thus, Danielle’s fake pregnancy could serve two purposes: to give them a strong plot for their show, and to increase interest in the Jonas Brothers’ music and comeback tour.

According to the blind item reveal on Blind Gossip, a source close to the Jonas brothers reveals that Kevin and Danielle were trying everything to make the fake pregnancy seem more legit – from giving fans access to the announcements, accepting baby gifts, and setting up interviews to discuss their future as parents. The report also states that Kevin and Danielle actually bought several fake pregnancy bellies from a company called Moon Bump, which makes prosthetic bellies for television shows and movies.

However, they’ve hit a little snag in their faux pregnancy. Eventually, they would have to produce a child, right? Well, they apparently have tried to adopt in time for the ‘birth’, but they haven’t managed to do so. Since they’ve found out, they have decided that their only course of action is to pretend as though Danielle has had a miscarriage, and blame the miscarriage on family troubles [i.e. Joe’s drug addiction].

The Jonas brothers tour and album is cancelled, so it wouldn’t be a stretch to blame it on stress. But now that Blind Gossip has revealed everything, it’ll be interesting to see how Kevin and Danielle recover from this. I mean, the entire family should be held accountable considering that they all knew about this, including Kevin’s father. But to these people, money is the only thing that matters- and when it comes to E! shows, we know that the producers are willing to go to any length to secure ratings [i.e. Keeping up with the Kardashians].

What do you guys think about the whole scam? Let us know your thoughts in the comments.