BY Jackie Brown on May 28, 2013 | Comments: 3 comments
Related : Dancing With the stars, Khloe Kardashian 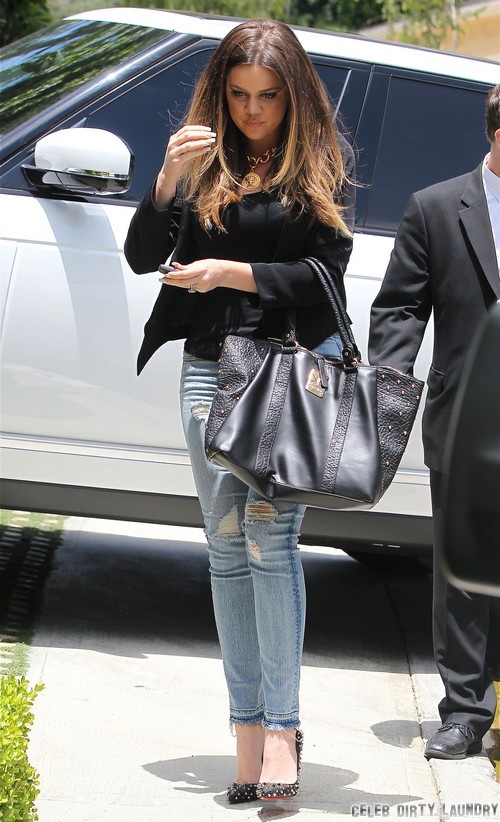 Khloe Kardashian may be joining the cast of Dancing With the Stars next season. In a recent interview, DWTS cast member Cheryl Burke said Khloe would be “amazing.” She also added, “I think she would win the whole thing.” Um, I think Cheryl is getting a little ahead of herself. Khloe has always seemed big and klunky, and quite possibly, the least coordinated and rhythmic of the whole Kardashian klan. And if her stint on The X Factor USA is any indication of her capabilities outside of her reality TV “work,” I think Khloe might get kicked off the show first.

Khloe wouldn’t be the first Kardashian to venture onto DWTS. Kim was on in 2008 and lasted three episodes. Brother Rob Kardashian made it all the way to runner up in 2011. Khloe may fall somewhere in between those two.

Khloe’s been in the news lately for her recent weight loss, and for selling some bootleg t-shirt that says “Rich Soil New York” for $35 with an emblem that looks a lot like the logo for the New York State Department of Agriculture. The t-shirt is part of a high end clothing line run by Khloe and her husband, Lamar Odom. In a letter to the Los Angeles based company, NY Dept of Agriculture lawyer Susan Rosenthal, demanded that the company “immediately halt the sale and advertisement of merchandise featuring the logo, and provide an estimate as to how much money it has made off the design.” If Rich Soil doesn’t respond, the state will take legal action!

Khloe is probably the least profitable Kardashian (in a dead heat with Rob), and whenever there’s a scandal involving the family and their “business/fashion” ventures, her face is always front and center with sisters, Kourtney and Kim. On her website she’s touting her weight loss tips and the Kardashian line of eyeglasses at Sears. Um, not too exciting and not too much moola coming in either. Maybe a stint on DWTS would be good for her and generate a little spare change outside of whatever she makes on Keeping Up With the Kardashians. However, I’m not sure she would be a fan favorite and with pimp momager Kris Jenner in the audience the crowd would really hate her. Besides, Kris might not have time to watch Khloe embarrass herself on stage – she is concentrating on the real money maker – Kim and the Kimye baby due soon.

Khloe Kardashian stops by her pregnant sister Kim Kardashian’s house in Los Angeles, California on May 24, 2013