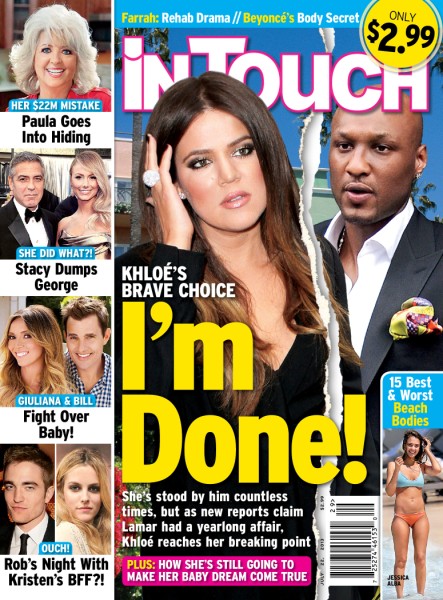 Finally! A Kardashian got a cover this week. Sadly, it wasn’t Kim Kardashian and that baby of hers but Khloe Kardashian’s disaster marriage to Lamar Odom is always a welcomed second. Apparently EVERYONE’S claiming he cheated and this was the last straw for her. So Khloe Kardashian’s done and kicked him out of his house. Let’s see how long it lasts.

Word on the street is that Khloe found out Lamar has been stepping out with D.C. hottie, Jennifer Richardson, for the past year. He met her on the road during the season and developed a taste. There’s a whole host of info out from Radar about phone sex convos and other kinky shenanigans. Believe it if you must. As for me, if it’s a Kardashian story and there isn’t picture proof then it never happened. I still don’t think North West exists.

Funny enough, In Touch’s cover spins the nasty story into a heartwarming one. Apparently Khloe isn’t going to let this little hiccup get in the way of her trying to conceive. She’s still going to make her baby dreams come true! So if Lamar wasn’t having sex with her I suppose this means she’s just going to find someone who will? Or maybe she’s going to go the whole sperm donor route? What will Kris Jenner think of next?

This week’s magazine also features some stories on George and Stacy’s break up and Rob Pattinson’s hook-up with Kristen Stewart “bestie” Riley Keough. Was she really a bestie? I thought they were co-stars who got along well enough?

All this is secondary to me anyway. The only thing I want to look at are the best/worst beach bodies. God damn you Jessica Alba!  She’s a freak.

So what do you think? Did Lamar Odom cheat? Is Khloe Kardashian done? Will you read to find out?