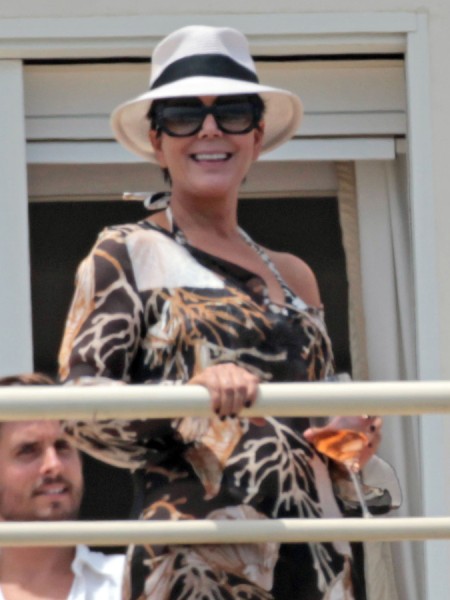 She sure had a lot to be celebrating this weekend. This morning on The Today Show, Kris Jenner pretty much confirmed what everyone was already thinking. She’s definitely going to use her little granddaughter to make sure her new talk show doesn’t colossally tank in the first week. It seems the Kardashian family has made us wait long enough. North West pics will debut in the coming days.

Although Kris tried to keep it coy with Matt Lauer and wouldn’t give a definitive answer as to when she’d flash the photos, she would not state that she wouldn’t be using the photos for ratings.  “I won’t tell you it won’t happen,” she stated. That’s enough for me. What about you?

So where are Kim Kardashian and Kanye West in all this? Obviously Kim let her mother win the battle in the end. Kris desperately needs those photos if her talk show is going to get off the ground and past this little summer interim stage. It’s pretty much a no brainer. The only question I have is if the show will coincide with the new tabloids on Wednesday. Will Kris use a tabloid cover of North West to take the opportunity to show more intimate, family photos? That’s the win/win situation. Not only do Kim and Kanye still get a massive million dollar payout from the magazines but Kris also gets her ratings boost. I feel sorry for people who thought Kris and Kim didn’t have this planned from the very beginning. It’s almost too obvious!

Do you think Kris’ photo sharing is appropriate? Most grandmas can’t help themselves from dishing but most grandmothers don’t usually have Kris Jenner’s ulterior motives either.

Visit NBCNews.com for breaking news, world news, and news about the economy