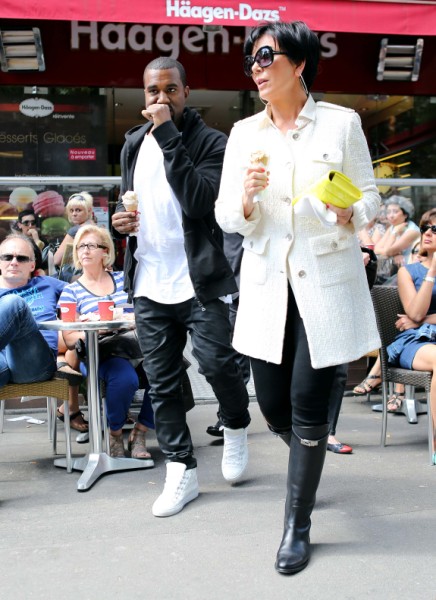 It’s been a couple of weeks and we still haven’t seen any baby pics of North West. I’m not totally surprised since she is a preemie and had quite the dramatic entry into the world. But her mom is Kim Kardashian and her grandmother is Kris Jenner so we all know those excuses won’t last too long. It seems it’s just a matter of timing now and making sure everyone gets a little piece of the pie.

Even though Kim and Kanye West have already told Kris she could not debut the baby on her talk show to score ridiculous ratings in her first week on air, Kris is still lobbying for a little handout. According to Radar Online, Kris has scored Kim and Kanye $2 million for a People magazine cover and she’s adamant over the fact that she should be able to at least show the cover on her show before it goes to print.

Come on Kim! Throw your mom a bone! She brought you into this world and made you the famewhorey star that you are! The least you can do is famewhore your kid out for her!

But Kim is wavering under the pressure. We all know Kanye isn’t about it but Kim has always had a hard time telling her mom no. Kris really wants this daytime TV thing to work. She’s hungry for it, yes? And when you’re that hungry for something you’ll do just about anything to make it happen. In Kris’ twisted mind she doesn’t see what she’s doing as pimping out her grandchild for her own financial gain, she sees it as sharing the love. North West baby pics are going to get out sooner or later, why not on her show? I’d be surprised if this didn’t end up happening. The North West magazine cover will land on a Wednesday. Kris can use the cover that day in her opening segment (along with every other daytime talk show host). But she’ll have inside details that the other hosts don’t have and maybe Kim will let her show some other photos as well to set her apart. That’s fair don’t you think? Kim will probably do anything to shut her mom up right about now. I get the feeling she’s this annoying little gnat buzzing around the house constantly reminding Kim about her deadline when all Kim wants to do is SLEEP. Oh, the joys of having Kris Jenner as your mother!

So what do you think? Kris Jenner’s show debuts July 15. Should we expect the cover to drop July 17? Please Lord, let Kate Middleton’s baby be born the day before. That would throw a monkey wrench in all of this Kardashian happiness/exploitation!