Kim Kardashian Torn Between Kris Jenner And Kanye West – Will She Choose Love Or Money? 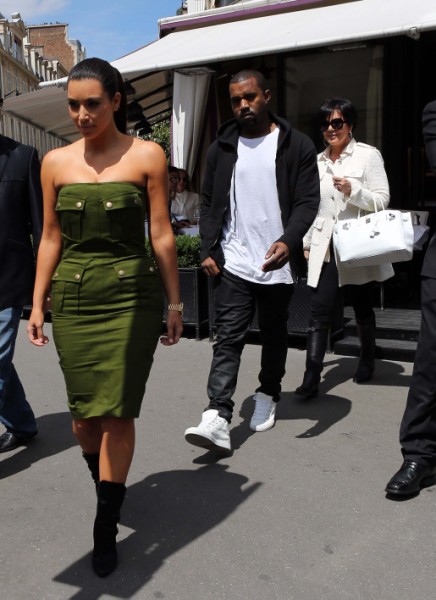 Officially divorced Kim Kardashian finally has Kris Humphries’ hulking frame off her back but her mother and current squeeze are still not making anything easy for her in her final trimester. It seems the two are still at odds over how to treat presenting Kim’s baby girl to the world and Kim can’t decide who to trust in making the right decision.

As you probably guessed Kris Jenner is all gung-ho to make as much money off that baby as possible. According to a source from Radar Online, she’s reluctant to give up control over the how the baby makes its grand entrance into the world. I figured she already has a couple magazines fighting for that family cover. Can’t you picture it? Kim and Kanye West in bed both looking at their sweet little bundle of joy? I think that was the Angelina and Brad baby cover for Shiloh but if it ain’t broke don’t fix it.

The problem is Kanye can’t exactly picture that at the moment. He’s in Kim’s ear telling her he doesn’t want the kid overexposed. It’s not like he needs the money and doing a People magazine photo shoot has got to be the epitome of uncool for the image-crazed rapper. I doubt he’ll be along for that ride.

So what’s a girl to do? Friends say Kim’s stressed. Well, Kim’s always stressed. Am I a total cynical biotch if I tell her to follow the money? It’s done her well so far. But this is hard! On the one hand I have no confidence that Kim and Kanye will make it so why stop being career-minded now? HOWEVER, the likelihood that Kim and Kanye will last longer than expected is greatly enhanced by Kim’s ability to shut her mother out and make decisions with Kanye. It’s a tightrope but it’s really a no-brainer. Is there anyone out there who actually thinks Kim will choose Kanye over famewhoring? Is Kim Kardashian torn and conflicted? Really?