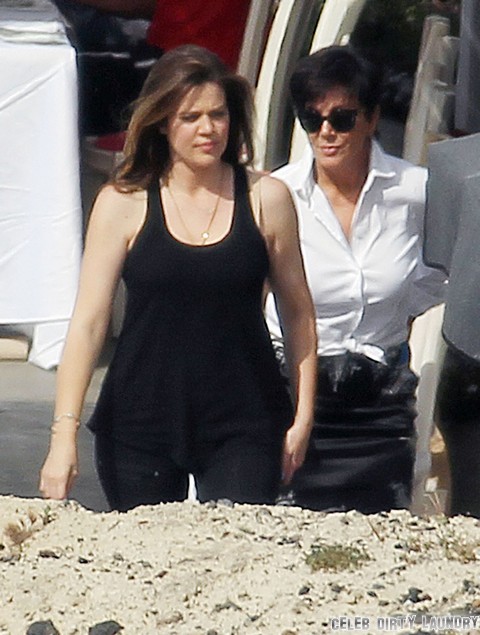 Kim Kardashian might just be the most superficial, self-absorbed celeb to grace reality television, but even I can muster up enough strength to feel a second of pity for her. I don’t know why on earth she had the misguided idea that having Kanye West’s child would be a great idea but damn, I’ll bet she really regrets it now! The couple has spent a mere 35 days together in the last 5 months and let’s be real here, this guy is really a piece of unsupportive work, isn’t he?

The whole Kardashian clan thinks so too, because according to the May 13th print edition of Life & Style, while on vacation in Greece a few weeks back Kris Jenner staged a bit of an intervention. She, Kourtney and Khloe Kardashian decided to corner Kim on her chronically MIA boyfriend. They each expressed their real worries for Kim and her baby. They think that if Kim continues on in this relationship she’s destined to be lonely and miserable. They all seem to think Kim should just pull the plug on her relationship with Kanye so that even if she has to raise the baby alone, at least she’ll have a chance to find a guy that treats her well.

Honestly Kanye’s behavior is making Kris Humphries look like a great guy. Even Bruce Jenner, who normally tries not to meddle, believes that Kanye isn’t carrying himself like a real man. Think about how really bad it is when people are suggesting Kim end her relationship while pregnant! Kanye would have to change his whole lifestyle to get Kardashian approval now and that’s just not going to happen!

Do you think Kim should choose to bounce Kanye and also choose to be okay with raising her child alone? Tell us your thoughts in the comments below!