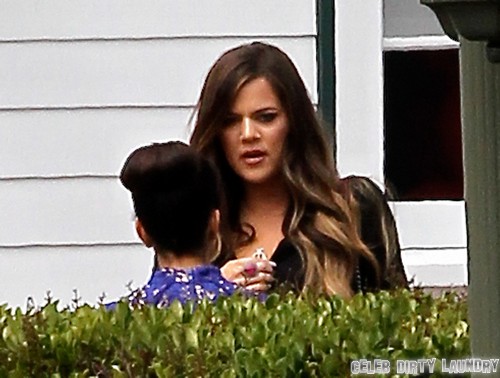 Khloe Kardashian has certainly had a tough month. It’s been several weeks now since the details of Lamar Odom’s alleged affair with stripper Jennifer Richardson leaked to the press, with raunchy details and pictures. While Khloe continued to stand by her man, Lamar ended up indirectly admitting his guilt when he went all Kanye on the paparazzi when they asked him about the affair. He has kept a low profile since the incident, but Khloe’s also done her best to avoid any topics concerning the scandal.

However, Khloe’s slowly trying to let herself trust Lamar again, especially since she let him back into the house after kicking him out earlier in the month. That may change when she hears that Jennifer is refusing to let the scandal die down, and she continues to give interviews about the details of her affair with Lamar. Apparently, Jennifer claims that she and Lamar were in love and even discussed a baby. A source explained that Khloe’s trying her best not to let the doubts cloud her head, adding, “This isn’t the first time Khloe has heard that Lamar has been cheating. But she’s torn. She doesn’t trust him but she doesn’t want to believe he cheats either. Still, she tossed him out of the house. And before that she kicked him into a separate bedroom.”

If there’s this much evidence to support his cheating and she still doesn’t want to believe it, then it’s her prerogative. For all we know, she could absolutely be right. Maybe Lamar truly is being taken advantage of in this situation. Somehow, I don’t believe it, but sometimes even the most obvious rumors are wrong.