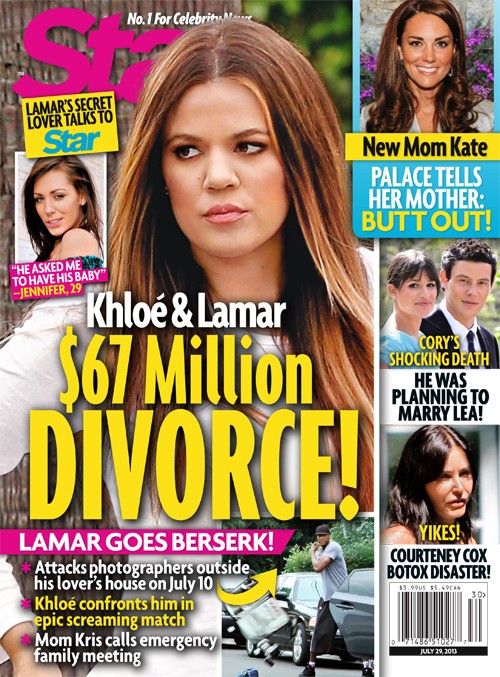 Fresh off the Louis Vuitton heels of Kim Kardashian’s new baby joy with rapper boyfriend, Kanye West, comes news of Khloe Kardashian’s divorce. Tabloids have reported marital problems between the big bodied, Khloe and NBA bench player, Lamar Odom in the past – this episode, however, stem’s from alleged concubine, Jennifer Richardson’s accusations of a torrid sexual affair that lasted over a year.

According to the new issue of Star, “Lamar led me to believe his marriage was just a business arrangement.” says Jennifer, (sounding eerily similar to Leyla Ghobadi– Kanye’s rumored jump-off). Khlomar’s $67 million divorce is in the works!

Fertility issues, and living life on stage in front of infinite cameras doomed the couple. Lamar Odom already battled tremendous pressures from baller groupies. Adding ‘Kardashian’ to his resume encouraged fame starved head hunters to ignite their aggression. Although some claim humiliated Khloe will remain loyal, (still insistent on having a baby with him anyway!), this was all before Jennifer Richardson opened her penis peckers to Star magazine. This worthless home wrecker supposedly has evidence of the affair, including plane tickets and basketball ticket receipts.

Odom reacted by lashing out at paparazzi, and destroying their cameras and equipment. Even Hoe-EE Khloe doesn’t deserve to be disgraced publicly by her ungrateful husband, and this off brand tattooed call girl. Jennifer Richardson broke all the ‘side chick’ rules after growing tired of being kept on the down low. Jet setting around the globe, and planning a baby with the cavity toothed ‘Candy Man’, wasn’t enough to shush the thrill seeking wanna-be celebrity.

Pick up Star to find out why Odom really attacked photographers, and the reason for the abrupt family meeting. Will the heartbreaking allegations lead to the divorce of the only married Kardashian sister?