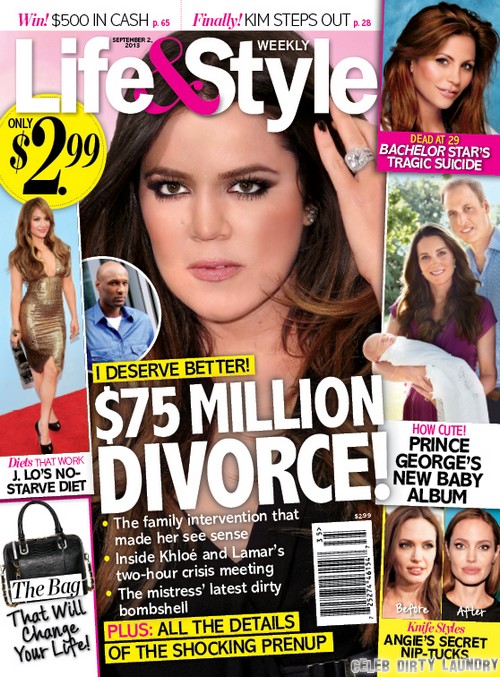 I have to admit, I had absolutely no idea that Lamar Odom is worth $56 million dollars! Since Khloe Kardashian’s face is in my face daily I just naturally figured her net worth was higher but he is three times more valuable in the numbers game. Believe me when I tell you that the eventual and inevitable divorce of this couple is going to turn into exactly that, a numbers game.

According to the Sept. 2nd print edition of Life & Style Magazine things are bound to get very messy because while the couple inked a prenup before their 2009 wedding, Khloe also included a clause that would make her a whole lot richer if Lamar cheated and by now the whole world knows that he can’t seem to help himself. In order to prove his infidelity in court all of the dirty details will need to be hashed out and both Jennifer Richardson and Polina Polonsky have already proven that they like to talk about bedding Lamar. Testifying in court will surely not be an issue for either of them. Khloe is said to be at her breaking point with Lamar and she fears more women could come creeping out of the woodwork to further embarrass her.

Also in the new issue of Life & Style you can get the latest info on the suicide of former Bachelor contestant, Gia Allemond. She was found hanging by her NBA boyfriend, Ryan Anderson last week and slowly the dirty details are beginning to seep out. It looks like a breakup fight prompted Gia to take her own life while on the phone with her mother.

Are you a fan of Angelina Jolie? If so grab the latest issue to learn all about all of those little nips and tucks she has had over the years to keep herself looking younger. In the meantime, do you think Khloe is going to file for divorce soon? Tell us in the comments below!