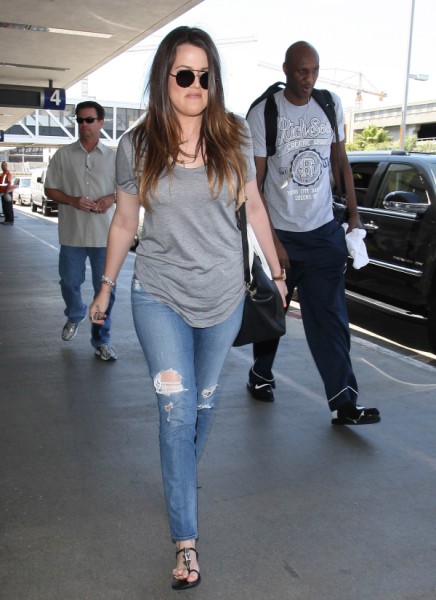 Either someone’s not very good with the numbers or somebody’s had their hands in the cookie jar. Lamar Odom and Khloe Kardashian are under major scrutiny for not making good on their promise to give the proceeds of their charity, Cathy’s Kids, to fund cancer research. Lamar started the charity back in 2004 in honor of his mother who died from stomach cancer. It’s raised $2.2 million so far and has not given a single penny to cancer research. So where’s all that money going?

No one knows for sure. According to reports from Yahoo, 60% of the proceeds ($1.3 million) went to finance two elite youth basketball traveling teams. Lamar’s charity also states it’s mission is to help under-privileged kids in inner cities so I guess that part is legit. He’s a pro basketball player so I get funding inner city traveling teams but what about cancer research? Khloe Kardashian is even auctioning off her clothes and accessories for the charity. You’d think she’d have a better understanding of where the money’s going. Is Khloe Kardashian stealing or, rather, misplacing the dough? I doubt it. Only degenerates steal from charities especially when they have as much money as the Kardashians. Sure, most of the Kardashians are pieces of shit but I have a soft spot for Khloe.

This truly sounds like misinformation but I’m not sure if it’s intentional or not. Lamar Odom’s mom’s charity was set up to fund cancer research, among other things. All the money has gone towards the other things thus far. So it’s misleading. This is tough because on the one hand, they are doing good. Khloe and Lamar are giving money to some sort of charity. On the other, it almost seems like they are using cancer as a means to fund elite basketball teams. Maybe I don’t want my money to go there if I’m donating. Maybe I really want it to go to cancer research. So maybe there should be two charities instead. Or maybe Lamar should keep a better eye on it since I’m sure he has people managing it for him. Whatever happens, people still need to know where the rest of the money has gone. If my math’s correct, there’s still 40% unaccounted for.