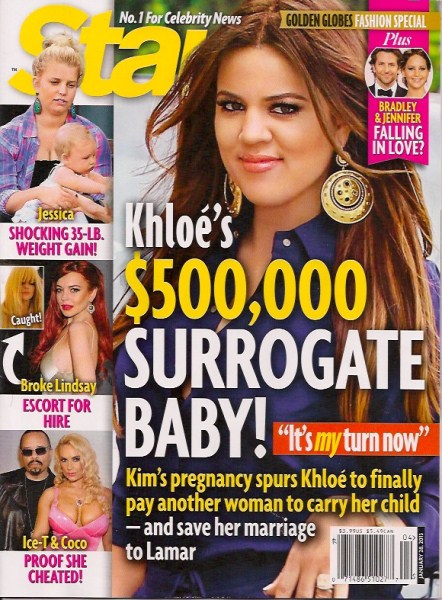 According to the latest cover of Star magazine, Khloe Kardashian paid $500 000 for a surrogate baby. She allegedly hired a surrogate because she’s jealous of Kim Kardashian’s heavily publicized pregnancy. Right. We know Kris Jenner would most probably do such a thing, but Khloe? She only has nip-nips and tears going for her at the moment.

A source alleges that Khloe “balled for days” after Kim K’s “slap in the face pregnancy”. Khloe “changed her state of mind and decided to use Kim’s pregnancy as motivation to go the surrogate route so she can have a baby as soon as possible.”

These bitches need to get a life.

The source adds, “She had always been against surrogacy, because she really wanted to carry [Lamar Odom’s] baby herself. But now she’s saying it’s her turn to have a baby – and she will go to any length to make it happen.” Another source adds, “[Khloe is] being extremely rough about the woman she will choose to carry her baby. She even says she would pay half a million dollars for the right woman!”

Revenge is a dish best served cold, as the source states, “[Khloe] can’t wait to see Kim’s face when she finds out she is having a baby too. Kim is so fame hungry, she’ll freak out when the attention isn’t all on her!” There’s nothing like the smell of some sibling rivalry in the morning…

Gossip myth busters claim that this is “100 percent b.s.” We disagree. The Kardashians have done worse in the past.