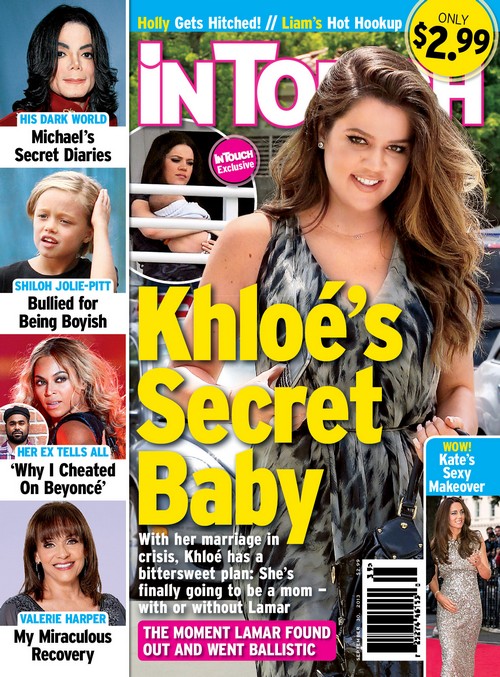 Sooner or later Khloe Kardashian was bound to get sick and tired of hearing about her husband, Lamar Odom’s drama. Months of Lamar’s drugs, Lamar’s ho’s and Lamar’s lies have kept Khloe stuck in an emotional mess that no one could pull her out of until she was ready to breathe again. Finally she is there and is finished being consumed by the mistakes of a man that may never get help. Instead she is turning her focus back towards what she can control, her own life.

According to the Sept. 30th print edition of In Touch Khloe has decided that it’s baby time even if that means that she’ll be a single mother. Khloe had often said that adoption or surrogacy wasn’t something she was considering while happily married but now everything has changed. The thing that Khloe wants more than anything is a child and she is ready to take whatever steps are necessary to be a mom. Adoption and surrogacy are both options that are being considered and the Kardashian family is happy to see Khloe focus on something, anything other than her obviously broken marriage.

Did you know that Michael Jackson kept secret diaries? Me neither but I have to say, it doesn’t really surprise me one bit. Uncovering that mans’ private writings would be pretty interesting and it seems that the latest issue of In Touch has stumbled onto something of interest here.

Also if you’re one of the millions tuning into Dancing With the Stars then you’re probably already amazed by Valerie Harper’s strength and grit. Her cancer is said to be nearly in remission and she obviously feels well enough to take part in the competition which is pretty amazing, don’t you think? Tell us your thoughts on these stories in the comments below!