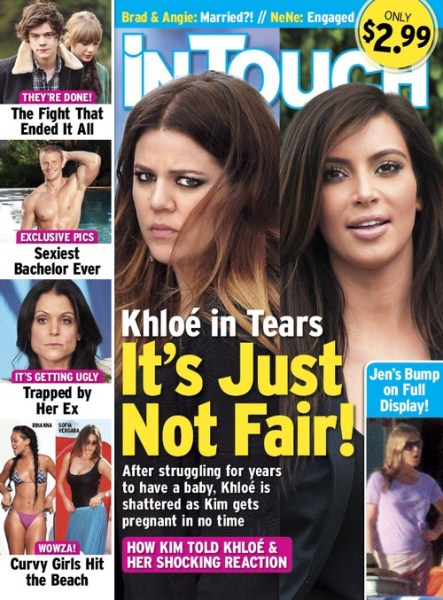 Kanye West and Kim Kardashian are overjoyed with their baby news as is most of the Kardiashian/Jenner clan, but there’s one family member that’s been devastated by the news. In its new issue, In Touch magazine exclusively reveals that Kim’s younger sister Khloe Kardashian Odom has been feeling bittersweet about the new couple’s baby announcement. 28 year old Khloe has been struggling to get pregnant for the past three years and is “shattered” by Kim’s happy baby news.

One of Khloe’s pals told In Touch, “Khloé has been telling everyone she’s so happy for Kim — and part of her is — but deep down, she’s heartbroken. She wants a baby so badly and feels like everybody around her is able to have kids but her.” Khloe’s other big sis Kourtney Kardashian has been extremely fertile herself – easily getting pregnant with son Mason and daughter Penelope, so this is doubly trying for her.

Last season on Keeping Up With the Kardashians, we saw Kim and Khloe at a fertility specialist getting the bad news that she’s not ovulating. A source close to the Kardashian family revealed to In Touch “Kim told everyone at the family Christmas party [on Dec. 24]. She was scared to tell Khloé — she really didn’t know what to do or how to tell her.“

When Khloe heard Kim’s big baby news, she cried tears of both joy for Kim and sadness for her own infertility and inability to conceive with husband Lamar Odom. Khloe drowned her woes in alcohol on Christmas eve after Kim told the family. The family pal said, “She went full force on the champagne at the party.“

Although Khloe has been acting thrilled for Kim and telling fans she’s “so freaking excited” about her big sister’s baby news, fact is the pl says “Khloé is hurt and jealous.” Khloe has always done things the traditional way and doesn’t understand why her happily ever after isn’t working out the way she planned. The In Touch source told the magazine, “She was supposed to have the true romance that neither of her sisters had, settle down and start a family. It’s really hard for Khloé to see both her [older] sisters having kids…. Neither of them is even married yet.”

To read more about Khloe’s heartbreak over Kim’s baby news and her own struggle to conceive, pick up this week’s copy of In Touch!