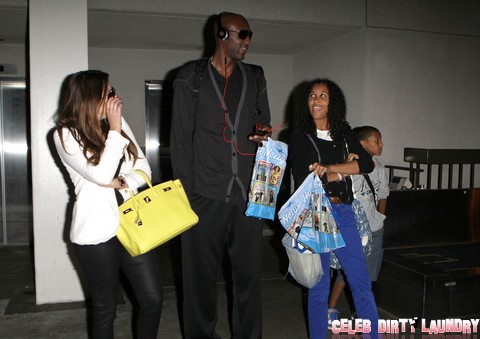 I’ve said it before and I’ll keep saying it, Khloe Kardashian is really her own worst enemy. I know that it can’t be easy being a member of the Kardashian family, especially when you have a momager that plays obvious favorites and pits her kids against each other, but Khloe really needs to stop comparing herself to her sisters. There is going to be tons of pressure for Khloe to measure up, at least as long as she allows herself to feel it. That’s where she really needs to stop beating herself up.

Instead of celebrating the fact that she recently completed her first ever hosting gig on The X Factor and enjoying her marriage (probably one of the most stable family relationships ever), she is killing herself with stress.  Her sister Kim Karsdashian’s pregnancy news has left Khloe absolutely gutted. Let’s be realistic. It was bad enough when Kourtney Kardashian had not one, but two babies with douche lord, Scott Disick. Seeing Kim sign on to be Kanye West’s baby mama  is unbearable. Khloe has been married for years and has been very vocal in putting her family first. She’s the sister that will be a great mom which is probably why having a baby has been an ongoing challenge.

Hubby, Lamar Odom has supposedly wanted Khloe to halt fertility treatments so that he can focus only on the stress that comes from playing pro basketball. She, on the other hand, believes that if she gets pregnant right now it’ll solidify their marriage. According to the new issue of Life & Style Khloe is ready to sneak another round of in-vitro treatments to try and have that baby.

Instead of taking a real break from the stress of trying to conceive, Khloe’s desire to compete with her sisters is now wreaking havoc on her marriage to Lamar. Instead of making things good between them she is bringing in the stress that results in Lamar partying without his wedding ring!

Will Khloe take a step back and realize the big picture before she totally chases Lamar away for good? Tell us your thoughts in the comments below!