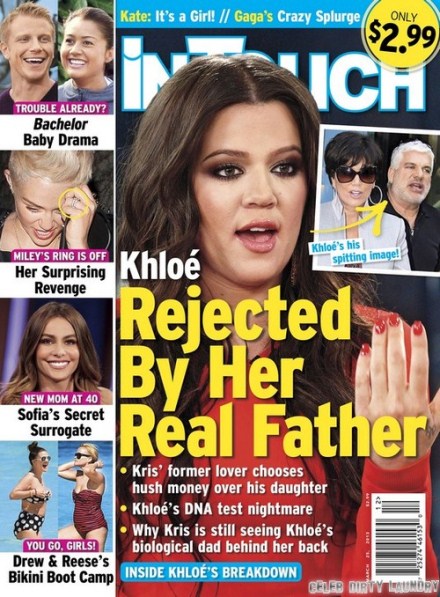 According to the latest cover of In Touch Weekly, Khloe Kardashian has been rejected by her real father! The magazine is obviously still playing on the idea that Khloe is actually Kris Jenner’s former hairdresser’s biological daughter.

Remember Alex Roldan? Now, everyone will because he is also featured on the cover of the tabloid with Khloe’s mother. Khloe previously went through a DNA test — but that was to prove that Kris is actually her mother. There has been no real, public DNA test for her to establish paternity, so the question will always remain.

The magazine reports that Khloe’s real father has actually taken some hush money over his daughter. The tabloid takes us inside Khloe’s reported breakdown to give us the dirty details on Khloe’s DNA test nightmare and why Kris is still meeting up with her real father behind her back.

Stay tuned for any other breaking news on this story as it is made available! In the meantime, tell us what you think of all of this DNA drama!