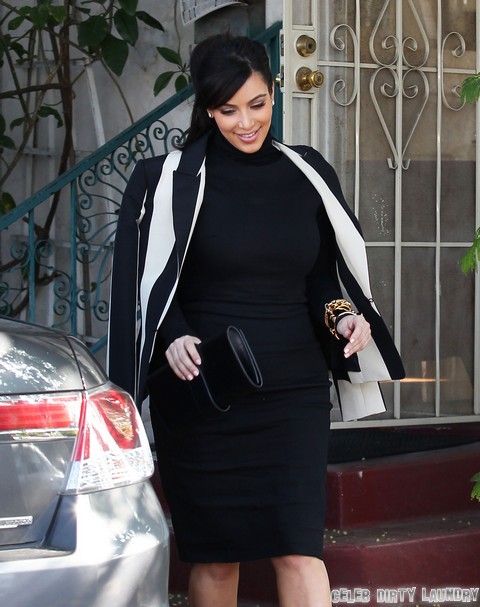 No surprises here! It’s all part of the growing trend to franchise individuals—the name becomes the center of the business. No person better exemplifies this law of celebrity than Kim Kardashian (controlled by momager pimp Kris Jenner). The reality TV star has all business enterprises attached to the distinctive ‘K’ name, and many of her lines include her last name in the brand. So it shouldn’t be shocking that she’s told Kanye West that she’ll never take his name—and that their baby will be a Kardashian too!

“Kim told him she’ll always be a Kardashian,” an insider told Star Magazine, print edition February 18, 2013. The yes-woman is saying no—possibly for the first time in her life, and it’s all to make sure the cash keeps flowing in. Keeping Up With The Wests just doesn’t sound right, does it? “Kanye is very disappointed and upset about the whole thing, but Kim is refusing to budge.” Of course, she won’t risk hurting the brand for her man! The business side was something Kanye could wrap his head around, but passions were ignited when she listed her other demand: “She may want their baby to have her name too!”

We’ve read mixed reports about the celeb future for the baby; some claim Kanye has put his foot down and banned all media, while others say Kris has gotten Kim on her side, and that fans can expect a birth special on E! It raises the question: will Kim give up TV for Kanye and her baby? I think not! Of course, Kim has worked out a more tolerable reason for refusing the name change! The insider reasoned that “she also thinks it’s a way to let him know that she is not after him for his money.”

Considering that she could probably make more money in a tell-all divorce special than she could in a divorce, this doesn’t seem like a major factor. Plus, she’s still married to Kris Humphries, so any Kanye nuptuials are months (if not years) away! And her family fortune is huge! That’s not to say the woman isn’t a shameless gold digger. What wouldn’t she do for a few dimes to tuck into a Chanel wallet? Do you think the Kimye baby will be a Kardashian or a West? Will there be a TV special surrounding the baby?