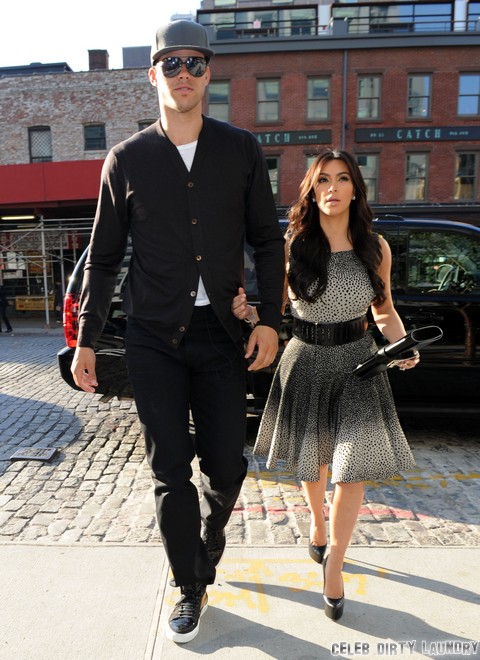 It’s been a rough 16 months—that’s how long Kim Kardashian’s divorce from hubby Kris Humphries has been dragging on. The two seem no closer to settlement than they were the day she filed, probably because Kris is set on proving the marriage a sham, while Kim refuses to budge an inch and risk losing a dime of her fortune, or reputation. The reality star describes herself as a hopeless romantic, and she’s sure to loose credibility and fans if she confesses to a fake marriage, all for the sake of a few ruddy million.

But since her untimely knocking up by boyfriend Kanye West, Kim has realized the importance of finishing her divorce, which may mean compromise with Kris. But before she does anything super drastic, her legal team is trying to pressure the court to rule in her favor, given her upcoming birth! But Kris won’t budge. His legal team responded with a strongly worded letter about Kim’s motives. “What is really going on here is that an ‘urgency’ in the form of an apparently unplanned pregnancy, something [Humphries] had nothing to do with, is perceived by [Kim] as an opportunity to gain a litigation advantage by trying to force this court to prematurely set this matter for trial.”

Basically, Kris’ team says: nice try, but we’re not going to give in just because you and Kanye skipped out on the condom. A lot of money is at stake—besides their prenup agreement, Kris is forbidden to speak about their marriage, unless he’s granted an annulment. If the gag order goes away, he’ll make a fortune in book deals and interviews. Of course, he says it’s all about pride and doing the right thing, but we know it all comes down to a dollar sign!

It seems like this will never end, but eventually their judge will decide that there are no more game changers lurking around, and will officially split them up—one way or another. While Kris certainly seems a bit obnoxious, we totally get where he’s coming from. Kim is obviously a fame whore, and he deserves the right to speak about their sham wedding. Remember that big-money divorces can be amiable and fast—think of Tom Cruise and Katie Holmes! But Kim won’t dare put her career or reputation on the line! We hope that Kanye can learn from this and have his lawyers set up better legal documents when it comes to custody and any potential marriage with Kim! She’s the daughter of mom pimp Kris Jenner—and the apple didn’t fall far from the tree!