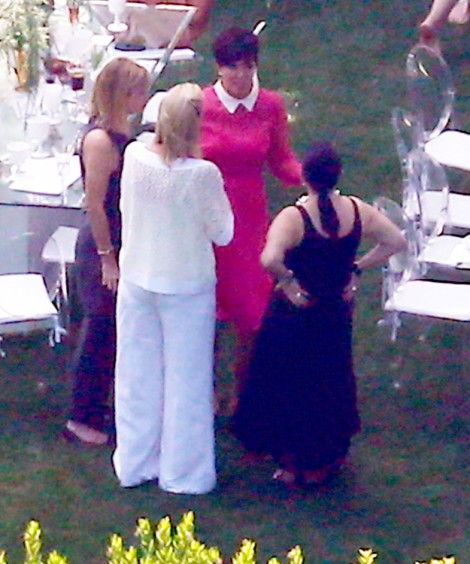 Kim Kardashian’s baby shower took place yesterday and she must have had some Garden of Eden theme going on because all the women had wreaths in their hair and the Kardashian girls wore white. Please tell me the irony wasn’t lost on you. And surprise, surprise, Kanye West made an appearance. Either that or he robbed the place.  He was all covered up in somber tones and hid his face from the paparazzi on the way in giving off a shady vibe. He couldn’t have been the life of the party.

And he definitely wasn’t declared Radar Online. According to sources Kanye showed up late as some people were leaving and still managed to leave early (I’m not sure how that happens). He spent most of his timing trying to dodge the cameras and barely worked the room like Kim thanking people for being there. “The singer didn’t look happy to be there…. Kanye looked like he had been sucking on lemons. Several of Kim’s friends felt sorry for her because Kanye just couldn’t put a genuine smile on his face.”

Now, I just want to point out that I read a story earlier that said Kanye was actually pretty cool while he hung out and seemed excited to be around his family members that were invited. He even rubbed Kim’s belly in front of the guests.

So we have two very different stories and two very different Kanyes. I don’t suppose it’s out of left field to think he could have acted both ways during the time he was there. The dude is nothing if not an emotional roller coaster. I could see him showing up all crotchety so he gets the attention he wants and, knowing he has the crowd, settling down and relaxing after. That’s what children do after all. Still…. dick move. The day wasn’t about Kanye West. Baby showers are for the women. Everyone knows that. The least he could have done was show up on time and show some support for Kim. But we all knew that was a long shot, right? It’s the Kanye West show all day every day.